My parents divorced when I was 9 years old. Most of my memories of them together involve quarreling. Pointless squabbles peppered with mean words and pulsing forehead veins. Their unnecessary war made me feel unsafe. I wasn’t sure where the enemy lines were drawn. Nor did I want to pick a side.

The war ended the day my dad locked my mom out of the house. They shared me through joint custody. I stayed living with my dad in our house, and my mom rented an apartment nearby, where I stayed most weekends. My older siblings, nearly adults, lived with us until they finished high school. 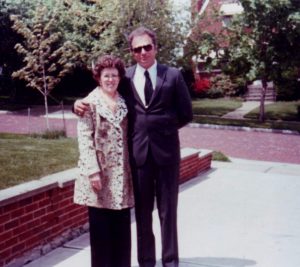 My parents in the front yard of my childhood home in Cleveland, sometime in the early 1980s. This is the only photograph I have of them together. Photo by Lisa McLaughlin-Bogucki.

By the time I was 11, my dad and I lived alone in our little house on the blue-collar fringes of Cleveland. He worked two jobs to make ends meet. I buried myself in my studies, and excelled academically. Physically I languished. My family had melted, and with it my appetite. I was so tiny that the pediatrician ordered me to eat one large ice-cream shake every day, for a year. It worked. My body again grew normally. But I felt as if my existence had been snuffed out by the divorce. Andrew Root makes this point in his article, “Fading from the Family Portrait”:

“I don’t wish to diminish the psychological and economic impact of divorce. But if we truly are relational beings, then divorce is centrally an issue not of psychology nor of economics but of ontology—an issue of our very being. It therefore feels a little like being erased, like losing our being in the deep divide that separates our divorcing parents.

When a young person is informed of her parents’ divorce, it might be that her deepest questions are about her being: How can I be at all now that Mom and Dad aren’t together? Now that they are two, she is unavoidably divided. She has one room at Mom’s and another at Dad’s, one schedule at Dad’s and another at Mom’s. As philosopher Martin Heidegger said, we have our being in our practical way of living, in our actions. And now post-divorce, because this young person’s action and living is divided, so too is her very being. Her parents are seeking to reverse, to go back, to be as if the two never became one. But she can’t do this because she belongs (in the very material of her person that acts with and for them) to both of them.”

I was delighted to find this story last summer in Christianity Today. Root tackles a topic that’s too-often taboo, especially in churches and Christian circles. He names the shadowy feelings encountered by children of divorce. And he summons the body of Christ to fill in the gaps created by divorce, to “be the community that sees children of divorce, acknowledges their reality, and embraces them in the fullness of their experience.”

Divorce isn’t optimal, but sometimes it’s the most reasonable option. People who get divorced aren’t going to Hell. My mom, who was married and divorced twice in her short life, followed Christ’s example more closely than anyone I know. I wish she’d tried harder to reconcile with my dad. If she were alive, I’d tell her that. My dad is alive, and I’ve shared the same sentiment with him. It’s taken 30 years, but my dad is repentant. If he had another chance, he’d do things differently. That he can admit to it is a feat, a muted sort of silver lining for me.

Children of divorce need love and affirmation. We need to hear that our parents’ split isn’t our fault. I know that now. As a 9-year-old, I wasn’t so sure. When I was dating my husband, I kept my parents’ divorce from him for a few months. I thought he’d stop liking me if he knew about it, especially because he’s from a divorce-free family. The revelation didn’t lead to us breaking up. But it did give him pause. He worried that I might be more inclined to get divorced. It took him a while to realize that the opposite is true. I’ll avoid divorce at all costs. Maybe more than the average person. If only to save my babies from the same plight I faced.