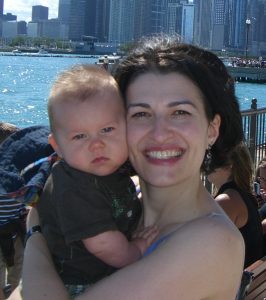 Then: Noah and me on Chicago’s Navy Pier, summer 2009. Photo by Matthew Cowan.

My son turns 4 years old today. So do I.

Noah’s birth was my rebirth. I awakened to the glorious, to the awful. To the sweeping power of a God who saves, redeems, loves. For awhile I mourned the death of my old self. Had life gone according to my plan, all would’ve stayed snugly similar, with the exception of a baby. I would take a few weeks off, get a nanny, and return to my freelancing career as soon as possible. I saw it as a series of to-do’s on my tidy life-list.

Through hindsight’s looking-glass, it’s  boring. God is not boring. He wanted more from me. I don’t know how much pain and suffering come directly from God. Whether he allows them through the normal course of man’s fallen tendencies, or at the hands of the Enemy. But pain and suffering are as vital to being human as joy is–and perhaps more beautiful. As George MacDonald says, “The Son of God suffered unto death, not that men might not suffer, but that their sufferings might be like his.”

It’s Not About Why Pain Comes …


I had trouble trusting God in my first days postpartum. I sort-of trusted him after my mom died. But at 15, I placed more of my trust in my dad and my extended family. Back then I thought of God as a shadowy figure frolicking on a far-off cloud.

By the time I had Noah 20 years later, God still seemed remote. To get my attention he would have to shout. So he shouted. Through the trauma of a forceps delivery, a late-night trip to the ER, a postpartum mood disorder and an autoimmune disease. As C.S. Lewis said, “Pain insists upon being attended to. God whispers to us in our pleasures, speaks in our consciences, but shouts in our pains. It is his megaphone to rouse a deaf world.”

While I was pregnant with Noah, people would ominously offer, “Your life will never be the same.” I was bent on disproving their preachy theory. That’s why I wanted to return to my career and hire a nanny. Some things might change, but I would still chart the course for my life. As I listened to the world, I grew deaf to God. But not completely. 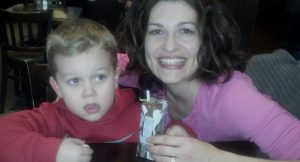 Maybe pain finds us so we can gain a better sense of the sweet, dynamic champion we have in Christ. But we have to trust God on this point. In his book Where is God When It Hurts, Philip Yancey writes that we can’t expect to understand why pain comes.

Instead, response is our assignment. Paul and other New Testament authors insist that if we respond with trust God will, without doubt, work in us for good. As Job himself said so presciently, “… those who suffer he delivers in their suffering; he speaks to them in their affliction” [36:15]. …Where is God when it hurts? He is in us–not in the things that hurt–helping to transform bad into good. We can safely say that God can bring good out of evil; we cannot say that God brings about the evil in hopes of producing good.

Lying on the bathroom floor a few nights after Noah was born, I decided to trust God. If he could bring me out of my hell, he could do anything. In turn, I would use my writing to tell his story.

He did deliver me. He can do anything. And I am writing for his glory. If I forget, I look at my precious son, and reflect on his birth.