Gifts My Brother Gave Me

When I graduated from college, my brother flew in early to help me move. From early evening to very early morning, we trekked between Evanston, Ill. and Chicago, zipping up and down Lake Shore Drive, his rental car loaded with my furniture, clothes and books. Jim rented a room at The Drake Hotel and shuttled my other family members from the airport into town. 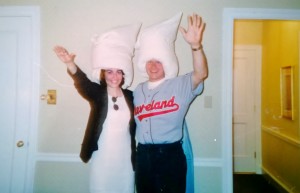 Jim and me clowning at The Drake Hotel in Chicago, on the day I graduated from college; June 1996/Photo by Carolyn Longbrake

Raising a glass of champagne after the graduation ceremony, he said he was proud of me for applying to Northwestern. Way back when I was in high school, he had discouraged me from applying to out-of-state colleges. He thought my chances of getting accepted would be slim, the tuition too steep. Besides, he didn’t want me to be so far away. He humbly admitted being wrong, and happily so–he knew Northwestern had changed my life.

Since Jim died almost three months ago, I’ve been reflecting on 39 years of memories. Like gifts without a shelf life, most of them bring new joy. As siblings do, we had occasional disagreements. But they didn’t linger, or mar a lifelong friendship.

My life was redefined after my mom died when I was 15. For years I’ve wondered what good there was in her leaving me before I could get to know her. Only after losing Jim have I realized how losing my mom was an unusual gift. The space created by her absence was filled by my brother and my sister, Lisa. Because I’ve had more time with them, I know them better and love them more. Their influence has been longer and stronger, shaping my personality and my world view.

If my mom had lived, my relationships with them would be different. I rather like the relationships I’ve built with both of them–and who I’ve become as a result.

My siblings, some of their children, and me in 1999; at Jim’s house in Ohio/Photo by James Bogucki

Jerry Sittser, who lost his wife, his young daughter and his mother in a fatal car crash, writes about flowers “growing out of the ashes” of  tragedy in his book, “A Grace Disguised: How the Soul Grows Through Loss.” One so-called flower was two new friends who met and got married because of helping Sittser with his children who had survived the crash. If his wife had lived, he wouldn’t have needed the help.

“There have been many such flowers, all gifts of grace. Gifts of grace come to all of us. But we must be ready to see and willing to receive these gifts. It will require a kind of sacrifice, the sacrifice of believing that, however painful our losses, life can still be good–good in a different way than before, but nevertheless good.”

I too have found gifts of grace in the ashes of Jim’s tragic death. One of them is a new friendship with a family of some of my brother’s dear friends. When he was at his lowest point over the summer, they supported and encouraged him in ways that prolonged and improved his life. I spoke with the family every day for the last month of Jim’s life, because they often saw him in person, and could gauge his body language and demeanor better than I could over the phone. Along with my sister and my brother’s best friend Chuck, we formed a life-support system to save Jim’s life. 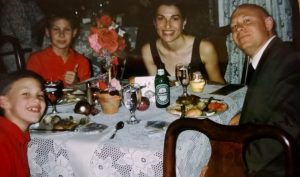 My sister’s sons, Nick and Jeremy, me, and Jim; at our cousin’s wedding, October 1999/Photo by Lisa Bogucki

The Gift of Shared Pain

Sittser also mentions regret in his book. “Regret is therefore an unavoidable result of any loss, for in loss we lose the tomorrow that we needed to make right our yesterday or today,” he explains.

My regrets are that he suffered for the last year of his life, that I couldn’t help him more, and that he’s not here for his two precious boys. Otherwise, I have no regrets about my relationship with Jim. Between us, nothing was was left unsaid. I talked to him almost daily for several months, and considered his suffering my own preoccupation. A friend of mine who is a psychologist told me that she believes that my sister, Jim’s friends and I probably saved his life many times over the summer. In that I rest. I could have done no more.

Brutal as the summer was, I’m thankful I did combat with my brother, against his depression. I’ll long remember the conversations, early and late; the three days in August that Lisa and I spent with him; and the sentiments he shared with us. A text he sent a few weeks before he died is perhaps the best gift of all:

“Please know that you have been beyond imagination a great sister, inspiration, and soul-builder through all of this. I needed someone as bad as I have ever needed anyone, and you stepped up and nailed it beyond possibility.”