Not Enough: When Guilt Follows a Suicide

After you lose someone dear, the first round of holidays is brutal. I remember the gaping maw that loomed the Christmas after my mom died. I figured the first Christmas season without my brother, Jim, would be similarly sad.

Shortly before New Year’s Day, my sister, Lisa, and I obtained the full police report on Jim’s death. Seeing the write-up was an important step in our grieving process, but it spurred a new wave of emotion, especially guilt. 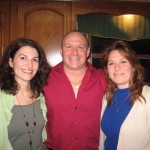 Me, Jim and Lisa at his house in Ohio; Christmas 2007. Photo by Laura Buck

As 2013 faded I was initially eager to be rid of the year that broke my brother’s heart, stealing him from me and my family. On the morning of New Year’s Eve, melancholy lurked. It grabbed me by midday. Closing out 2013 meant I was leaving Jim behind. The years ahead would never know him. My life would change in ways he wouldn’t see.

Grief comes in waves. The New Year’s swell stemmed partly from the police report. It included Jim’s suicide notes and pictures of the scene where the police found him. The saving grace was that Lisa and I looked at everything together.

Initially we hesitated about seeing the pictures: Did we want to relive the trauma? After some ado, yes. As searing as the images might be, he is our brother. His suffering is our suffering. The images filled us with dismay, but they were not gruesome or unexpected. I spoke to him minutes before he died, and I finally saw what he saw that day.

Jim wrote several notes, including one titled, “To the world,” and one to Lisa, me, his best friends, Sharon, Randy and Chuck, and his closest in-laws, Laura, Brian and Karen. I believe he wanted posterity to understand–to the degree possible–what he was about in life. Georgia O’Keeffe said, “Whether you succeed or not is irrelevant, there is no such thing. Making your unknown known is the important thing.” I strive to make Jim’s unknown known. In his note to the world, he said:

“God did bless me for a while with about 20 good years. Many people aren’t lucky enough to get that out of life. I was kind, strong, loyal, honest, hard-working, loving, friendly, religious, smart, fit, a great dad and husband, a good son and brother, I had a lot of people who loved and looked out for me. For all of those people I thank you. Please remember who I was not what I did.”

He was not insane. He referred to a “sickness” in his notes, and I agree that he was sick–at heart. The dissolution of his marriage broke his heart and weakened him mentally. Sigmund Freud said, “We are never so helplessly unhappy as when we lose love.”

For 24 years he built–the family, the home, the life he wanted, and a thriving business to support it all. He designed and constructed his home, brick by brick, and as he said, “carried everything in with my own two hands.” I am not overstating when I say he was the most involved parent I know. Norman Cousins said that “Death is not the greatest loss in life. The greatest loss is what dies inside us while we live.” Jim’s greatest loss in life was watching all that he had built crumble.

The pictures and notes kicked my subconscious into high gear. My dreams have been filled with different depictions of Jim since he died. After seeing the report they have been more colorful, at times unsettling. But mostly the dreams show him strong and well, fully aware of what’s happened since he left us.

Dream-like reassurances aside, dull guilt stalks me. Friends, family and acquaintances say they believe I did all that I could to help save my brother. He even said it himself, in text messages and phone conversations before he died.

Intellectually, I believe it too. I’m not God; I don’t have the power to save. Yet my heart isn’t yet in sync with my head. What I was doing, along with the rest of Jim’s inner support circle, was not enough. I still ask God why he didn’t equip me to do more. People get divorced all the time. My brother’s marital trouble didn’t need to lead to his death. 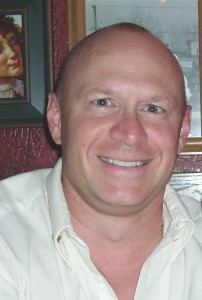 Jim at the rehearsal dinner for my wedding, April 28, 2006; Washington, D.C. Photo by Laura Buck

Because I was the last person to talk to him, because of the level of detail he shared with me, because we spoke constantly for months–I felt responsible for him. I believed he would emerge in victory, as long as he held my hand tightly enough.

Lisa, Sharon, Chuck and I, along with so many others who loved him, would be there to embrace him in triumph. Instead, we lost the battle. Darkness won.

Or so it would seem.

My hope remains. In time the guilt will recede, I’ll forgive myself, and joy will return. Right now I’m comfortable with gray hues dominating my landscape–an ambivalence that Jerry Sittser says “reveals the dual nature of life. We are creatures made of dust; yet we know we were made for something more. A sense of eternity resides in our hearts. Living with this ambivalence is both difficult and vital.”

Sittser talks about waffling between sadness and hope as he reflects on the accident that took his wife, daughter and mother. “My despondent mood casts a shadow over everything, even over my faith. On those occasions I find it hard to believe anything at all,” Sittser writes in A Grace Disguised: How the Soul Grows Through Loss. “But then I gain perspective. I remind myself that suffering is not unique to us. It is the destiny of humanity. … Jesus is at the center of it all. He defeated sin and death through his crucifixion and resurrection. Then light gradually dawns once again in my heart, and hope returns. I find reason and courage to keep going and to continue believing.”

The pain and suffering my brother endured while he existed with us, and the sorrow my family and I have in the aftermath will deliver greater good. Maybe it’ll be in this life. But certainly we’ll see it on the other side of eternity, where Jim now lives.