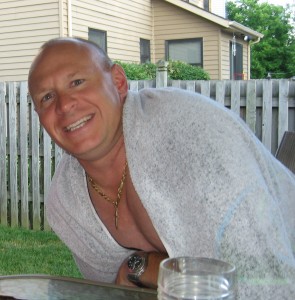 Jim at home in 2007, radiant and content. Photo by Laura Buck

Life after a suicide is confusing. The truth gets distorted, partly by the imprecise power of our memories. It can also be twisted by people looking to make themselves feel better. Suicide is a big, messy subject. It doesn’t fit well into our comfortably westernized lives. We look for someone or something to blame, saying it was “just mental illness,” or “he was a coward.”

I’m not confused about why my brother took his life: He wanted to return the golden age of his marriage. What puzzles me–and his many supporters–is why he gave his life for someone no longer in love with him. I wish it were less complicated to grasp. I’d feel better if I could just write his death off by oversimplifying things.

Part of pushing through grief is analyzing what happened. I need to understand intellectually while I process the emotions.

For the sake of clarity and truth, I keep telling Jim’s story–on this blog, in person, wherever I think it’ll make a difference and save lives. An important part of his story is that he was in an emotionally destructive marriage that triggered his depression. He repeatedly tried to repair it, and wouldn’t give up. He knew he was risking his life by attempting to fix another person while he was so weakened by depression. To do otherwise would be untrue to who he was, he said. So he persevered.

Jim temporarily fled his toxic home environment the day my sister, Lisa, and I left him after our August visit. The friends who’d invited him to stay were out of town that week. Rather than escape to a big empty house, he called other friends–Sharon and Randy. As Lisa and I packed up and headed to the airport, we talked to him on the phone. He agreed he needed to get away for perspective and relief. But it shredded him. I remember walking through the Cleveland airport, hearing him sob as he said he was pulling out of his driveway. Feeling helpless, I pulled at some Bible verses I remembered. I sounded authoritative and convincing. Thank God. By the time we hung up and I boarded the plane, Jim was much calmer.

Sharon and Randy’s home became an oasis for him; their love and support, indispensable. He stayed with them for nearly a week, and his symptoms of depression eased.

Losing You, Losing Me

Jim admitted he had lost himself in his marriage. He no longer knew who he was, because his marriage for so long defined him. We talked about his depression as an identity crisis, one that could ultimately result in good. As he worked through it, he looked forward to a renaissance in his life. God could turn even this into gain.

Many people lose their sense of identity–when they’re fired from a job, when a relationship fails, when they have children. Perhaps there’s no way to prevent these upheavals. Nancy Turner, a host on Moody Radio Chicago, called it “identity theft” on a recent show.

“There’s the evil one who wants to do identity theft. He wants to take (your) identity away from you and he’s working at it all the time,” Turner said in a conversation about divorce with guests Steve Yeschek, a caring ministry pastor, and Jim Bedel, a psychologist.

Yeschek agreed that the devil tries to lie to us. “He’s come to kill, steal and destroy in the midst of suffering. God wants to birth something good in our suffering. As we share in our sufferings with Christ that brings him glory, as we look to him, we depend on him for healing, for hope, for forgiveness and for us to still walk in the truth in the midst of that,” Yeschek said. “[T]hat description of identity theft, that’s what the enemy does. He tries to get the person going through divorce, or separation or being single–bringing these lies that somehow you are not worth as much, or you are worthless, or you have failed. And you’re not good enough. They’re shame kind-of lies. We need to put off the lies and put on the truth, in the midst of suffering.”

We lose our identities when we focus on how the world defines us; we believe we are failures, unable to sustain a relationship, as people who hurt our kids through divorce, Yeschek said.

That was my brother at the end of his life. The burden of believing a lie–that he failed and was worthless–overwhelmed him. He was the victim of identity theft. 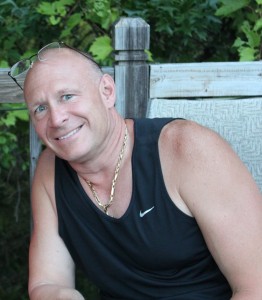 Jim in June 2013; eyes that speak of exhaustion and anxiety, and a forced smile. Photo by Laura Buck

Ironically, Jim also stayed true to who he was. He didn’t stop extending kindness and grace as a husband, even when he met mean-spirited behavior. He was loving and involved with his teenage sons. He planned going-away parties for friends and helped them with odd jobs around their homes. One day he discovered a car that had veered off the road, so he pulled over and rescued the driver. The man credited Jim with saving his life.

My brother’s final days were dark, but they weren’t void of light. I had a front-row seat to the evil and the good he encountered, and I’m different because of it. “Comforters must be prepared to let the pain of another become their own and so let it transform them. They will never be the same after that decision. Their own world will be permanently altered by the presence of one who suffers. It will bring an end to detachment, control and convenience. It will prevent them from ever thinking again that the world is a safe place full of nice people, positive experiences, and favorable circumstances,” writes Jerry Sittser in his book, A Grace Disguised: How the Soul Grows Through Loss.