Forgiveness After a Suicide: What Does it Mean?

My brother’s headstone has finally been placed atop his grave. I received a picture from a cousin who regularly visits the cemetery where Jim is buried. It says the basic stuff–he was a father, a husband; he was born in 1966 and died in 2013. Instead of a dash, a golden shamrock separates the years, reminding me he did, in fact, live.

I don’t like the headstone simply because it confirms his death. Headstones are little more than gilded grave markers. They hardly tell the story of a man, or do justice to his character.

But I do like the headstone because of the shamrock. It was Jim’s moniker, a good-luck charm he shared with people he loved. I have one he gave me a few Christmases ago, tacked up on the bulletin board over my desk. Jim had shamrocks tattooed on his calf, along his sons’ names. A dash would have said, “he lived.” The shamrock says, “he lived with a flourish.” 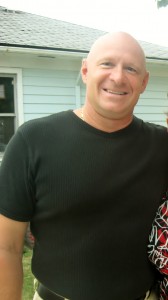 These days it’s a good reminder, when I wake from a dream so vivid, I briefly believe he’s still alive. I also relive conversations Jim and I had last summer. Wandering back through the dark alleys of his struggle, I search for clues about what I could’ve done to cast more light into his life. I wonder when the emotional hardship of his marriage began to tear at the fabric of his soul. Why didn’t he sooner reveal his troubled heart?

In trying to make sense of Jim’s confusing and tragic end, it often feels as if he’s still with me. In that way the seven months since his passing have been brief. I also cling to the plans we were making, to spend more time together. We wanted our kids to get to know each other better. In recent years he had been somewhat removed from his extended family because he was busy accommodating his wife. She didn’t want relationships with us, something we long understood. Because he wanted to please her at any cost, he sacrificed intimacy with us. He craved that intimacy. In his final days, he reclaimed it.

In his final year, he realized no matter what he did, he couldn’t please the person who was supposedly his soul mate. He subjected himself to verbal and emotional abuse, in hopes of restoring the relationship. Its demise was something he called his “kryptonite.” Verbal and emotional abuse are difficult to assess. “Verbal abuse is dangerous because it is often not easily recognized as abuse, and therefore it can go on for extended periods, causing severe damage to victim’s self-esteem and self-worth,” according to an article on MentalHelp.net.

I wasn’t privy to conversations he had with his wife, but he did recap many for me. While I’m not a psychologist, I was able to figure out he was in an abusive relationship. He agreed. Yet he couldn’t let go. His relationship became as addictive and deadly as a drug.

Some people I love and trust have said Jim made bad choices, that he picked his end without regard to the pain he would inflict on family and friends. I knew him quite well; he wouldn’t willingly hurt anyone. He was weakened by abuse that led to severe depression. In that weakness he was seeking relief, sleep, the ability to eat without wretching. The one bad choice he made was in not trusting the advice of his therapist and closest confidantes, to flee his marriage.

Some close to Jim are angry with him. They need to forgive him. I’m not in that camp. I am seeking to forgive his wife. For not reaching out last summer to me, my sister, and Jim’s best friends, when she saw Jim writhing. For acting as if she had no idea why he was suddenly depressed. For painting him into a corner as someone who was simply mentally ill.

I’ve had trouble finding a logical description of forgiveness. I have found extremes: forgive immediately, no exceptions—a favorite theme among Christ-followers. Or don’t forgive at all, because that allows the other person off the hook. I recently remembered a list shared by the pastor of a church I used to attend, on what forgiveness is not. The list, originally authored by Mark Driscoll, says forgiveness is not, among other things:

“Forgiveness is not forgetting. This is one of the great Christian myths. ‘Well, we forgive and forget.’ No we don’t! You can’t forgive and forget. You can’t. You were raped, molested, abandoned, beaten, abused, cheated on, betrayed, lied about. ‘Forget it’? You can’t forget it. It’s impossible,” Driscoll writes. I feel betrayed by my brother’s wife, just as he did. 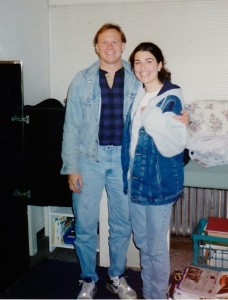 My brother and me at the start of my senior year of college, September 1995, Evanston, Ill./Photo by Angela Karras

I won’t forget what happened to Jim. But I will work on releasing the hurt to God, who brings justice to every case. With God’s help, I’ll build something lovely from the ashes of my brother’s ruins. I’m not sure what it’ll look like. But I know that it, like my brother, will flourish.