Six weeks before my brother died, I had a dream. The ultra-realistic sort, where you stir swearing it happened.

I’d gone to visit my sister, Lisa, in Texas. Her house had morphed into what looked like my grandmother’s old home in Ohio–a blurring of lines characteristic of dreams.

Planning a walk to the ocean, I offered to take Lisa’s dog, Shadow, with me. Shadow, usually a black Labrador retriever, had turned into a lion. Giant and full-maned, he frightened me at first—I thought he would bite. He didn’t. Instead, he led me along a path overlooking the water and a highway. I asked to descend the path so we could amble next to the water and the traffic, but the lion, who talked, said no.

I followed him until a looming, olive-green oil rig appeared. It ignited, sending the cars on the highway skyward first, and then they crashed into the water. Scores of people perished, as giant flames swallowed them and their cars. Stopping, I said to the lion, “I need to check on the people. I  have to try to save them.” He said OK, and that he’d meet me later.

My arms outstretched, I reached for victims of the explosion. I couldn’t save anyone. Back at my sister’s house, I conveyed to her how glad I was that the lion had set me on a different path. We were watching the news, and talking about the tragedy of it all. The lion returned and sat on my lap. He gnawed on my hand, as a kitten might. It didn’t hurt. He said everything would be OK, and to pray. His golden mane was electrified by an otherworldly persona.

On waking I was sea tossed, somewhere between comfort and confusion.

The next day I got up in the middle of the night, which is rare, and looked at my phone. On my Facebook feed there was a large link to Psalm 91, which is about God’s protection in times of trouble. Toward the end are two references to the lion: “You will tread on the lion and the cobra; you will trample the great lion and the serpent.” 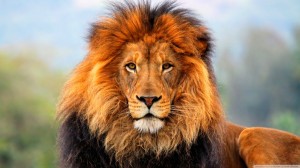 The lion in my dream was fierce only in his instinct to protect me./Photo courtesy of helenratcliffhotmailcom.blogspot.com

The following morning I listened to a segment on Moody Radio, and the guest speaker mentioned an encouraging song, “You Are I Am,” by MercyMe. I found a video for the song online, which offered pictures of lions and flames. I thought of my dream, and Psalm 91.

Henry David Thoreau said, “Our truest life is when we are in dreams awake.” The dream was as real as my waking life. God was talking to me through it, through the Psalm and the song, suggesting he knew about my brother’s depression. These signs framed my prayers and spelled solace for my brother when he heard about them.

In the time since Jim’s death, I’ve often thought God ignored my prayers that summer, and those of the many others supporting us. Confusion crops up. Why would God offer me the false hope of that dream, and then allow my brother’s suicide?

Recently I was listening to “You Are, I Am,” and a sliver of insight peeked through my confusion. The flames of this life devoured Jim, but God was present, offering his love and leadership out of the fire—to Jim and to me. He was with us, he is with us, he will be with us.

He calls on me to walk not by a clear understanding of tragedy, but by faith in him despite tragedy. Faith that he’s still in charge, still good, and still loving.

He calls on me to take a leap each day, because it’s hard to maintain faith, especially through the unsavory remnants of suicide. Gradually, that leaping is making something in me stronger.