Staying Healthy After Losing Someone to Suicide

In the days after my brother’s suicide, my cousin asked me how often I found myself sighing. She said, “When I’m too tired to cry, I sigh. I sigh a lot.”

After the exchange I noticed my own frequent sighs. According to one study, sighing serves as a mental and physical reset button and may bring some relief.

Such relief is sorely needed for those grieving a suicide. The mental and physical toll can be detrimental if we don’t find our way onto a path toward healing.

I asked Dr. Tom Ellis, director of psychology at The Menninger Clinic in Houston, how someone can pursue a healthy existence after suffering a suicide loss. As a clinical psychologist and researcher, Ellis’s main focus is suicide. Despite obstacles for those left behind, he says, there are ways of regaining sure footing.

Witnessing my brother’s swift descent into depression and suicide was like watching a tightly wrapped ball of yarn unravel, each thread fraying into a jumble of shreds. Jim seemed to have life figured out. Others in his suicide support group told him if he couldn’t bounce back, there was little hope for them. His death undoubtedly doused their hope, as it did mine. At its worst, suicide can paint life as nothing more than a dark streak, devoid of meaning.

Still, the thoughts can lurk. This is an emotional challenge faced by those coping with suicide loss. 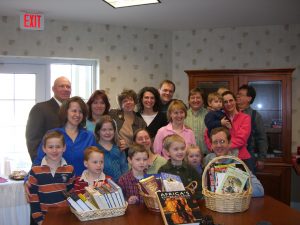 My family in March 2006; my brother, Jim, is at the far left. This shows just some of the people affected by Jim’s suicide. According to the American Association of Suicidology, for every suicide there are at least six survivors. Some experts find this estimate conservative. I agree with them.

Ellis said it’s important to remember grief is unique to the individual. “People’s experiences are very different. I think we err when we suggest there’s a certain way to go about [grieving],” he said. Rather than trying to fit into a mold, Ellis suggests respecting your emotions and trusting your own wisdom. “People are different, and relationships are different. One person might feel angry, and another, not so angry. And that’s OK.”

Society tends to push the bereaved to “move on” after a loss, to seek a return to normalcy. “I think that expression, ‘Move on,’ is really a loaded one. Because there is the implication that everything should be back to normal, like it was before,” Ellis said. “It can never be the same.”

There’s no timeline on how or when to deal with the grief that follows a suicide loss. But staying mired for an extended period of time isn’t healthy, either, Ellis said. This can be marked by a sense that it’s wrong to laugh or enjoy things. “Studies have shown that something as simple as physical exercise can do wonders for one’s mood, as well as physical health. It’s important not to abandon recreation or hobbies,” Ellis said.

Getting in touch with others who’ve experienced suicide loss is vital, according to Ellis, especially because of the stigma. Those who haven’t gone through it often don’t know what to say, or how to offer the support a person needs — and they can say and do things that unintentionally cause more pain, he said.

The American Foundation for Suicide Prevention has a variety of resources for loss survivors, including more than 50 local chapters and a section on its website about coping with suicide loss. The American Association of Suicidology hosts an annual conference for those who lose someone to suicide, offers a Survivors of Suicide directory with details about local groups, and other useful information.

General grief groups can be helpful, too. I’ve attended a chapter of GriefShare, a national group that offers group discussions, video seminars with expert interviews, and a workbook for reflection and journaling. GriefShare has helped me to continue healing, and to better understand the grieving process.

For a child, losing a parent is the ultimate tragedy — not to speak of the separate horror of suicide. My mom died from cancer when I was 15. At 40, I still grieve her, and part of me will always feel like that teenager. “We make a fundamental error when we liken the experience of loss known by a child whose parent dies to the experience of loss felt by an adult. The concepts and the very language of adult loss are inadequate to capture the panic, pain, terror, and confusion of a grieving child,” writes Dr. Maxine Harris in her book, The Loss That Is Forever: The Lifelong Impact of the Early Death of a Mother or Father.

Children whose parents die by suicide, Harris says, “may come to doubt their own worthiness and inherent goodness. Perhaps it was because they were not good enough that the parent chose to leave them.”

Ellis says the emotional and intellectual sides should be considered in helping a child grieve a suicide. Emotionally, children need compassion, nurturing and acceptance from adults in their lives. This provides a safe space for them to experience, express and process their feelings. Intellectually, adult supporters must help children understand they’re not to blame, and educate them about depression and the depth of suffering that can accompany it.

In a section about the sudden death of a parent, Harris writes, “[I]t only takes one shattering event of sufficient magnitude to change one’s core beliefs about life.”
The death of my mother and brother were shattering events. They’ve changed my beliefs — for the better. I’ve learned not to ask why bad things happen, but how to cope well with such bad things, and turn them into something glorious. For me that means when I remember my brother, I’m challenged to love the people around me better, to forgive faster than I’m inclined, and to be kind when I’d rather not.

I’ve also come to believe sorrow isn’t the enemy of joy. It’s joy’s fraternal twin; the one we’d like to avoid, but can’t. Indeed, sorrow can strengthen our experience of joy. There have been dark days since my brother died. But when I’ve least expected and most needed it, joy surfaces, in a force fuller and more meaningful than ever.