A Month in France

I’ve never lived there, I can barely scrape together enough French for a sensible sentence—let alone match the language’s dreamy lilt. I’ve only passed through on trips, mostly for pleasure, and once on the tail-end of a business trip. Not nearly as put-together as the average French woman, I haven’t yet mastered the stern-yet-loving discipline tactics of the average French parent, either.

But France has such a distinct sense of place that when I leave, I miss it. Maybe that’s because it’s rather unlike the fast-forward culture of my native U.S. There’s something about being in a foreign country that makes me both appreciate my home and find ways it could be better. After my last trip to France, I wrote a piece about some differences between France the U.S.,  from a labor-workforce perspective.

In that piece, I didn’t touch on one of the most startling differences: the food. The French hold utmost reverence for what they eat. They don’t gorge, and they demand quality. Chicken tastes like chicken should, probably because the animals aren’t doped up on hormones and antibiotics. Driving from Paris to Strasbourg, my husband and I refueled our car and our stomachs at a rest stop. The deli offered a variety of neatly arranged baguette sandwiches. I settled on one with thin shavings of cured meat and cheese, tomato and Dijon mustard. Such gastronomic bliss and proper portions are but a dream at most American chain restaurants. As for the rest stops here, I skip the grease-laden, over-sauced food. Better to go hungry than risk digestive malaise.

The importance the French place on food is steeped in tradition. I brushed up against it in Paris, Lyon, Strasbourg and Nice, when I asked for black tea with a topping of steamed milk. Most shops wouldn’t serve it that way, despite having both black tea and milk on the menu. One suggested I try another place down the street. I was confused. Surely they wanted my business. This, as my husband pointed out, is American logic. In this case, tradition trumped profit. To the French shop owners, the way they served tea was perfect. Changing their tradition just to make money was out of the question. Even as it frustrated me, I respected their commitment to something they value.

My husband has special insight into the French mindset because he was born there, in the southeastern town of Albertville. He spent most of his formative years in Lyon and Strasbourg. When I met him, his European ways attracted me. That remains true, even when he corrects something I’m chopping or boiling in the kitchen.

These anecdotes are tiny scratches on the surface of a remarkable country. When my children were born, I wanted to take them to Europe, to show them two countries, especially—France, and Greece, where my roots lie. News of late has me wishing that more than ever. I grieve with France for the many lives lost in the last few years, due to savage acts of terrorism. Yet I’ve seen enough of France to know that its bedrock principles of liberté, égalité, and fraternité—liberty, equality, fraternity—cannot be snuffed out by terrorists.

In the spirit of standing with France, I’ll honor it here on my blog over the next 30 days. I’ll post images I captured during my trips there. The first include pictures of Haut-Koenigsbourg, a 12th-century castle in Alsace. My husband and I visited the castle during our cross-country tour of France in October 2007. Later that day we lunched on salad Nicoise and white wine. Afterward, we sped through the golden vineyards of Alsace along the Route des Vins. The air was so heavy and sweet, it tugged me into and out of a daytime doze. 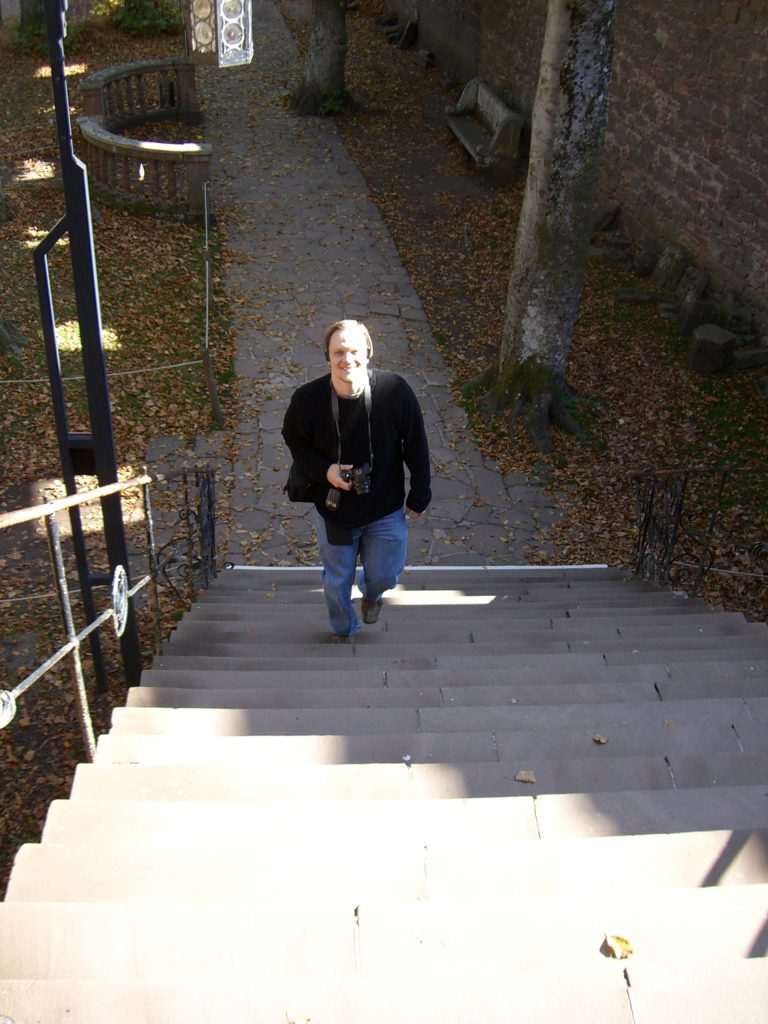 Going up? Enjoying the grounds of Haut-Koenigsbourg, October 2007. 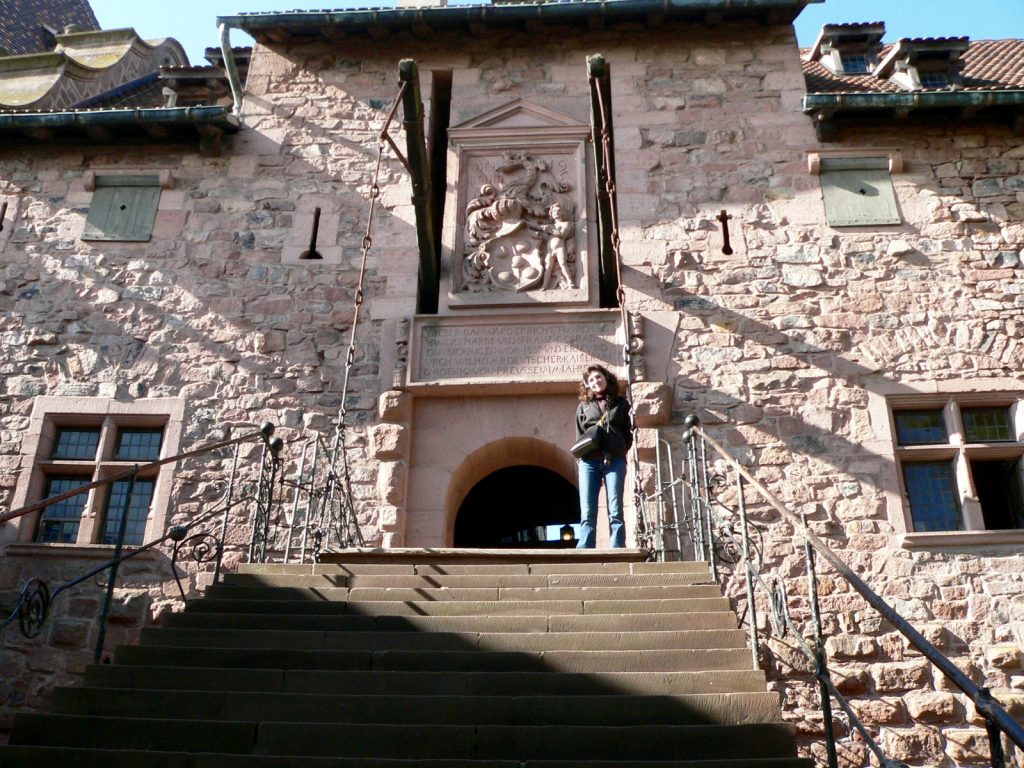 Do I see Romeo? No balcony required. 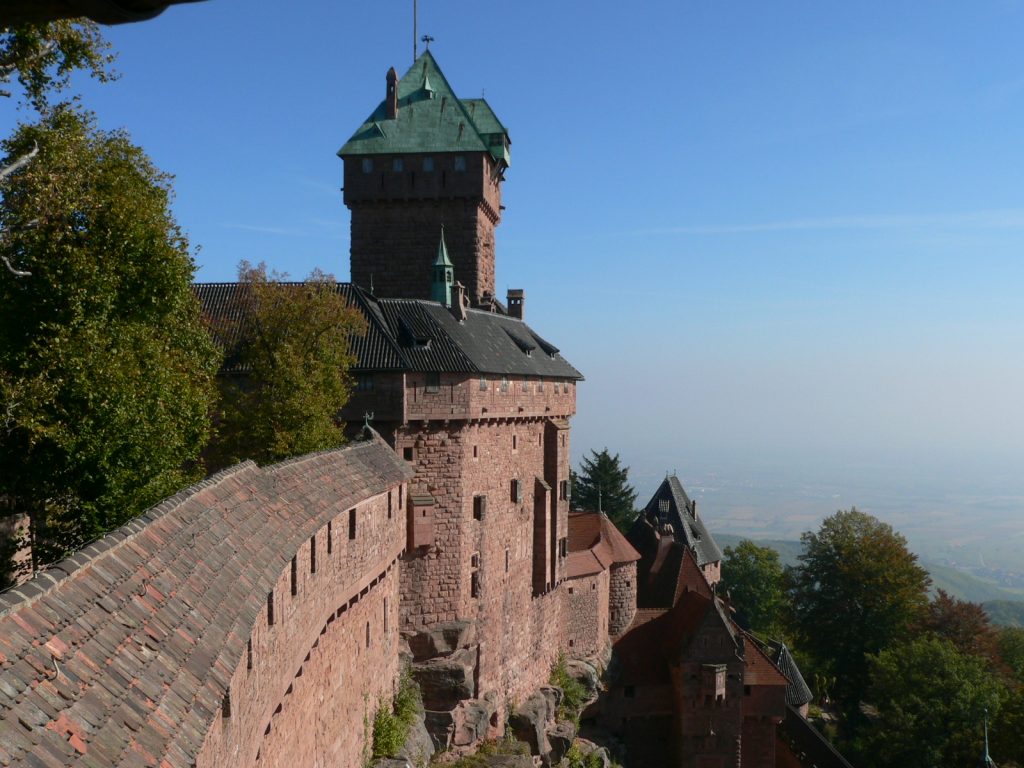 A mighty fortress, this Alsatian castle. 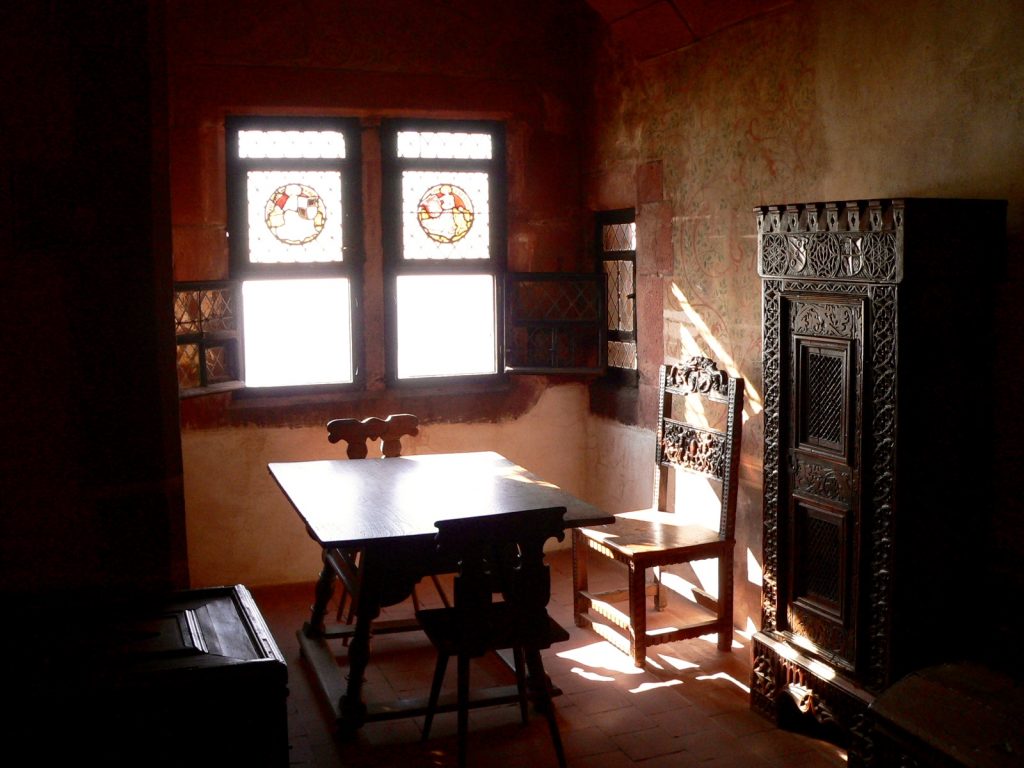 Shafts of light chase away dark within the castle. 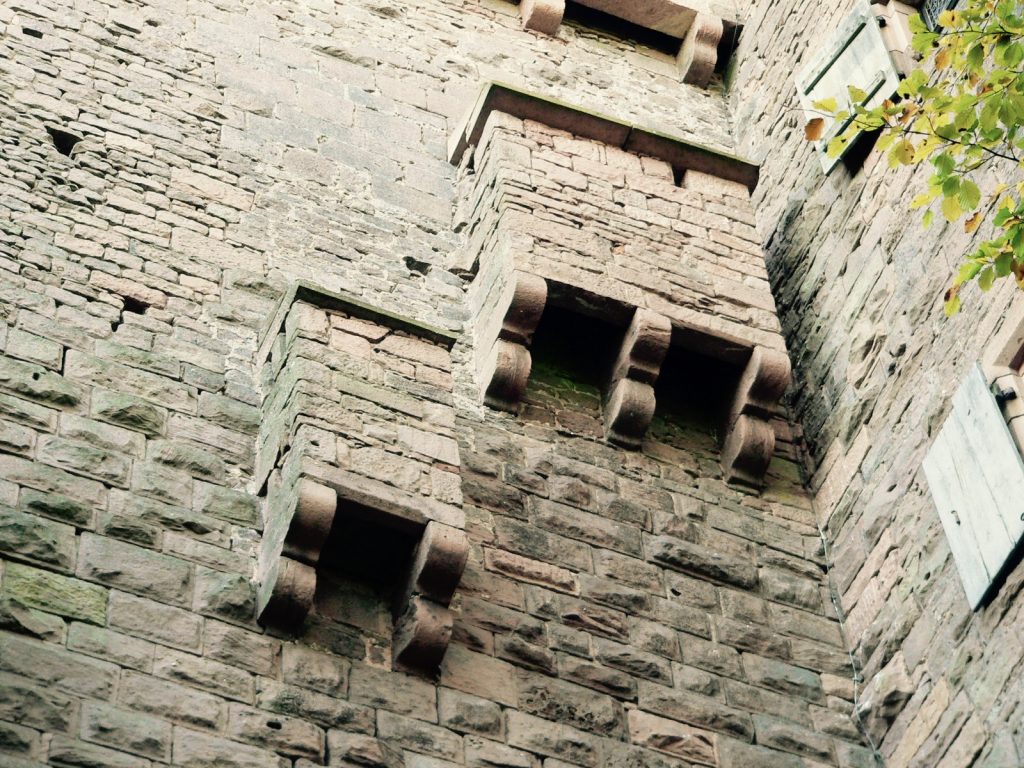 An exterior wall. I can’t recall the name or purpose of these structures, but I bet if they could talk, they’d share good stories. 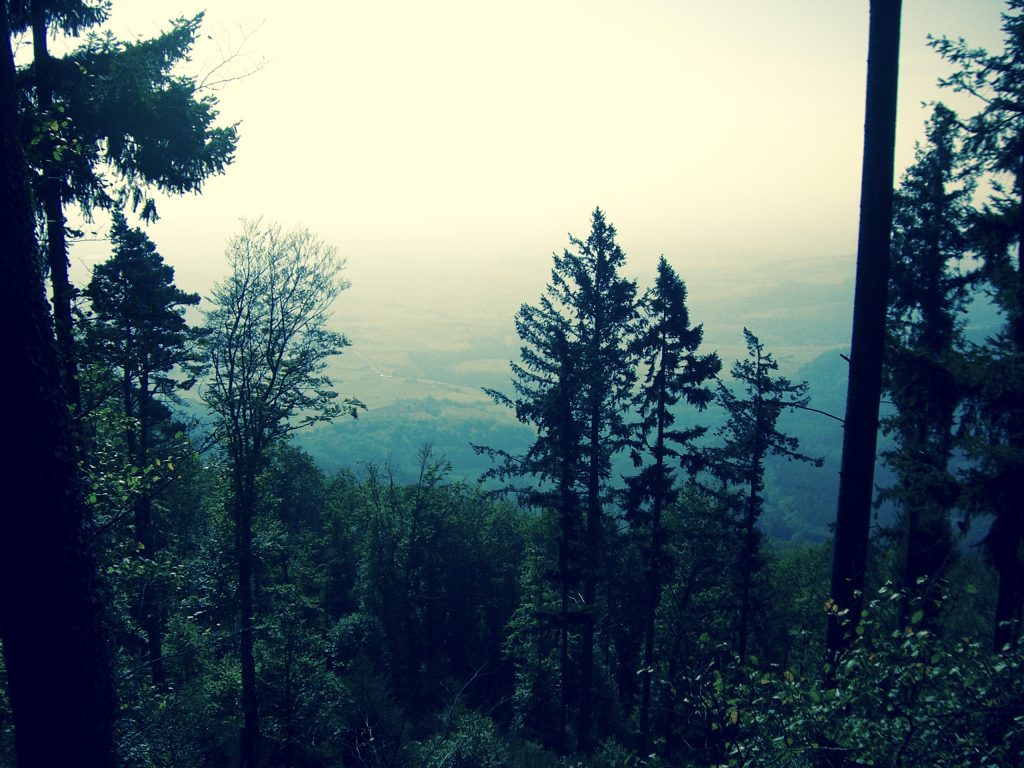 The forest and its trees. We just need a few Medieval knights in armor. 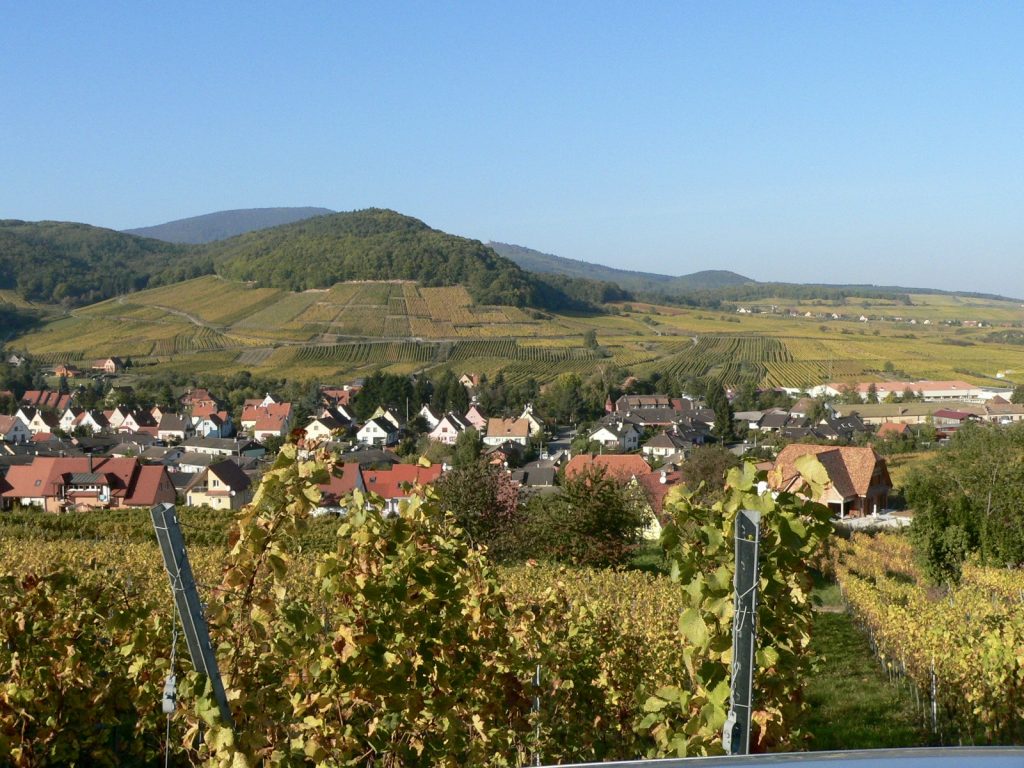 Most photos by Kristina Cowan. Those of the author herself were taken by Matthew Cowan.