The most famous places in Paris–like Le Tour Eiffel and the Arc De Triomphe–are stunning. 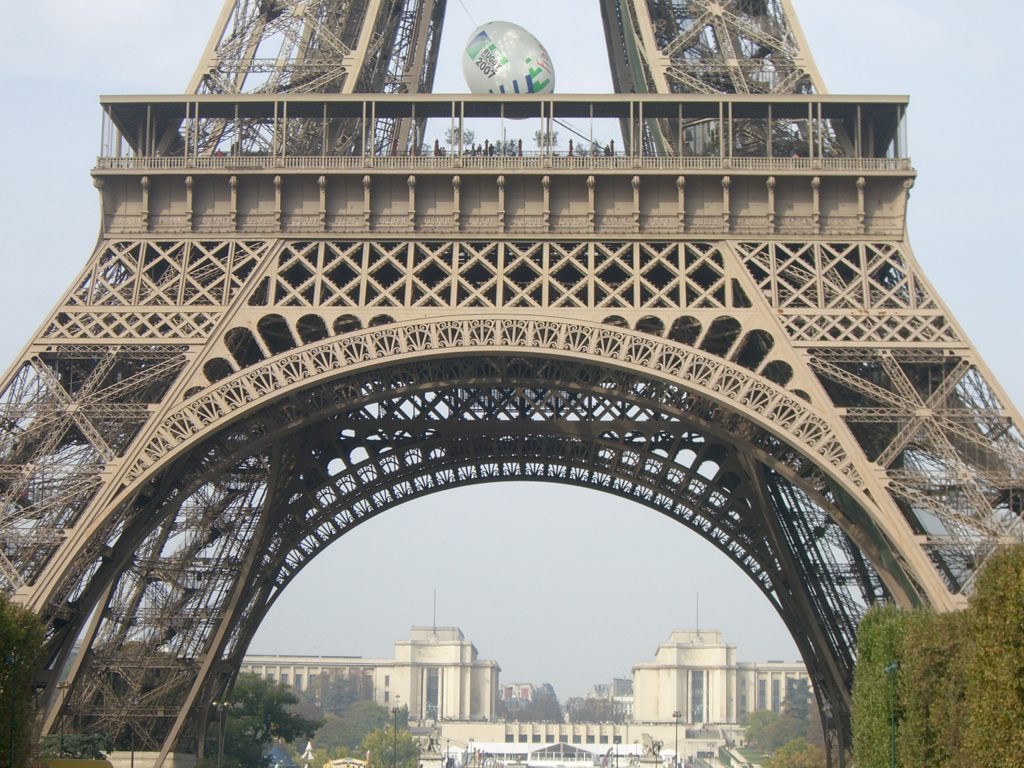 On any given street, there’s a line of uncommon beauty, too. Symmetrical bliss in design and layout. An eye-catcher in the distance. 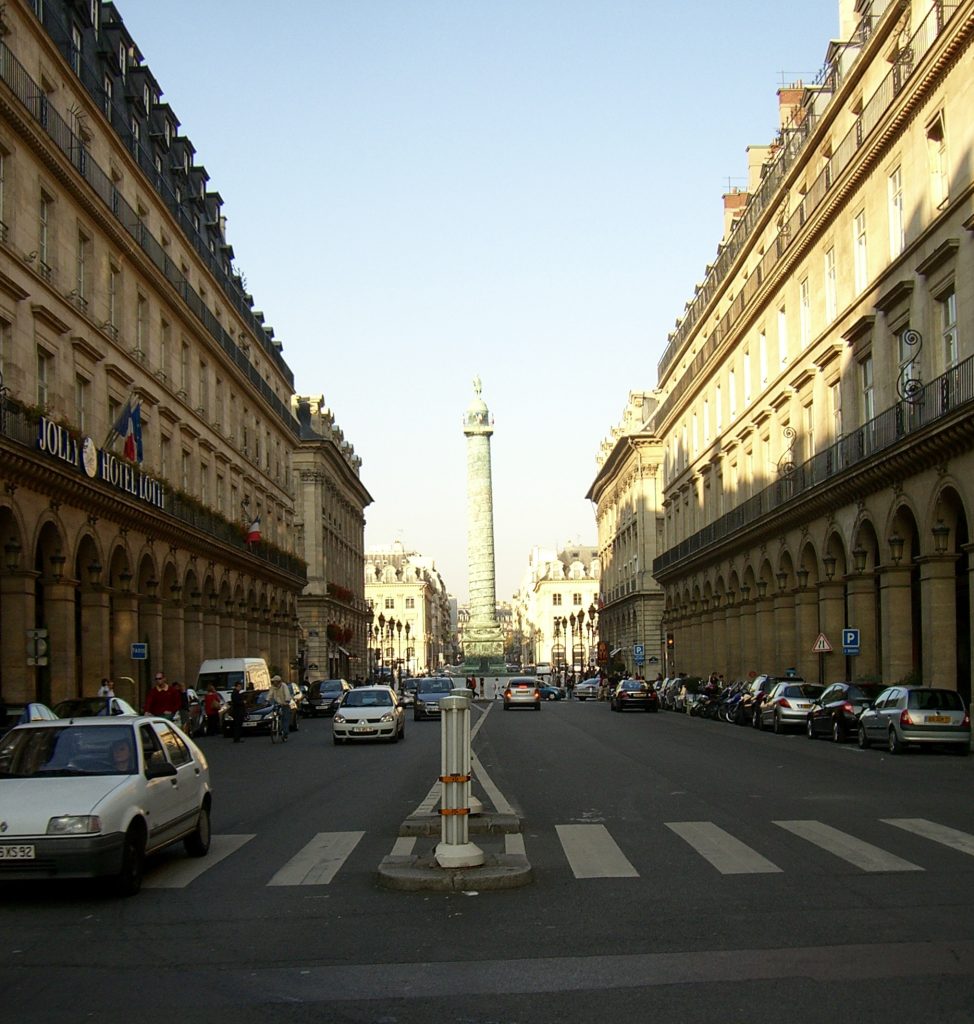 The city bears the scent of perfume, Vespa fumes and crepes. 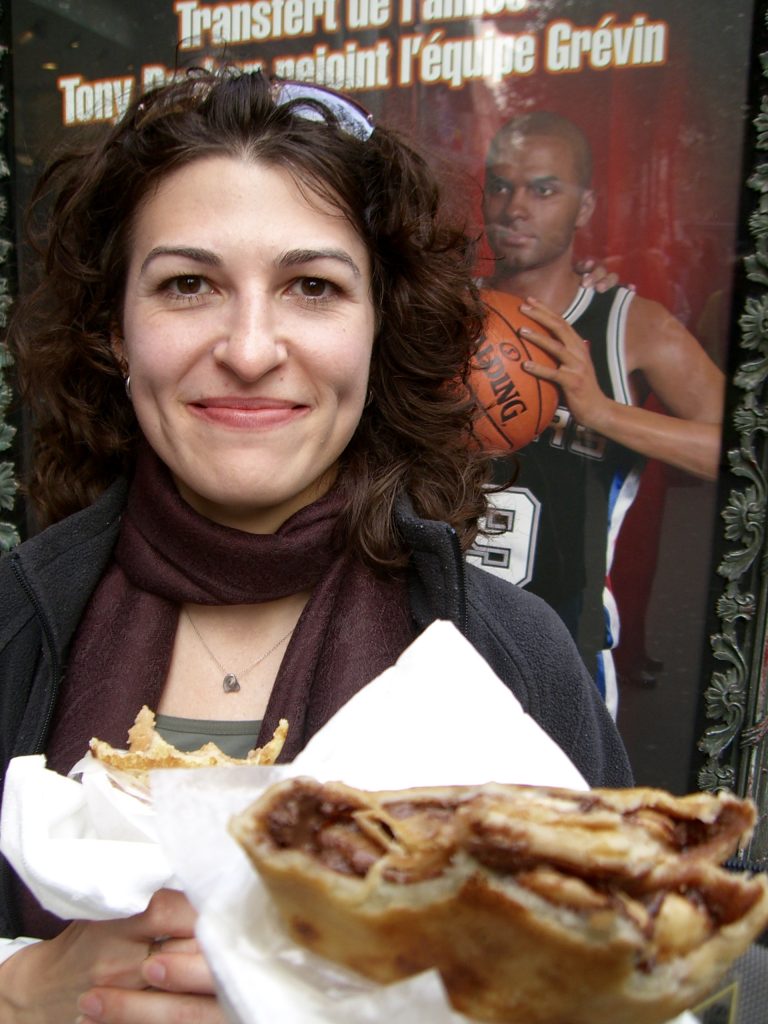 Traffic curls in loops of organized chaos. I wonder just how all those cars driving around the Arc steer clear of the endless rounding about. 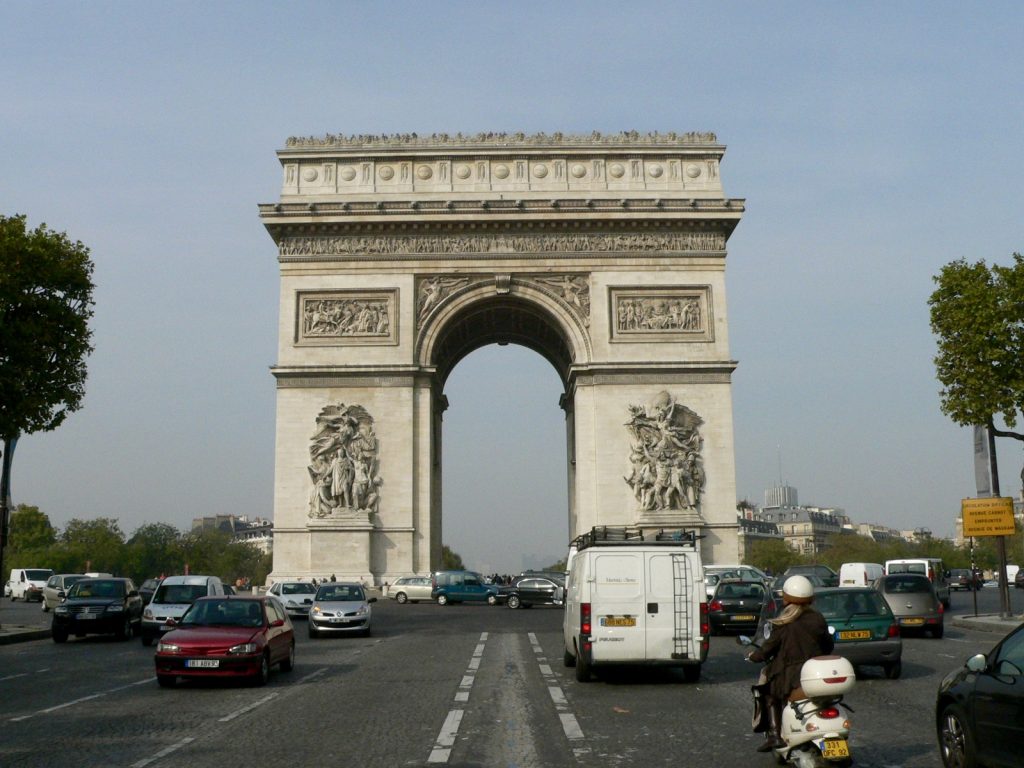 Detail of the Arc’s interior. 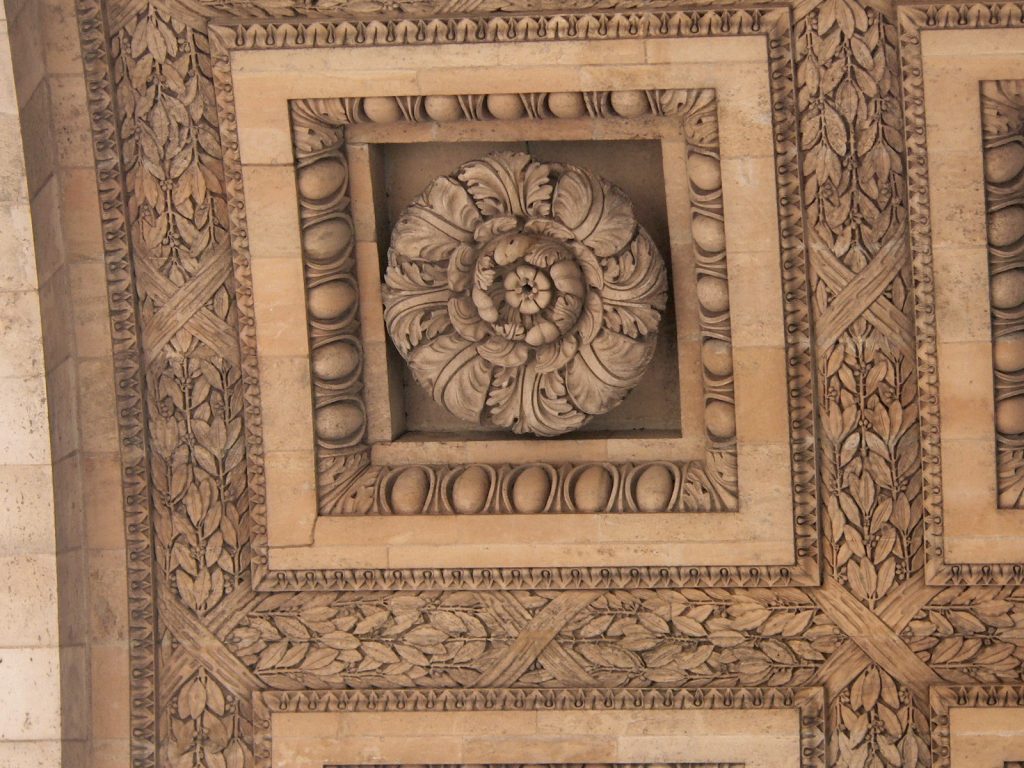 On our 2007 trip, our first walk through the city was around dinnertime. We were jet lagged. Once we crossed the Place de la Concorde and its fountains, we started to wake up. 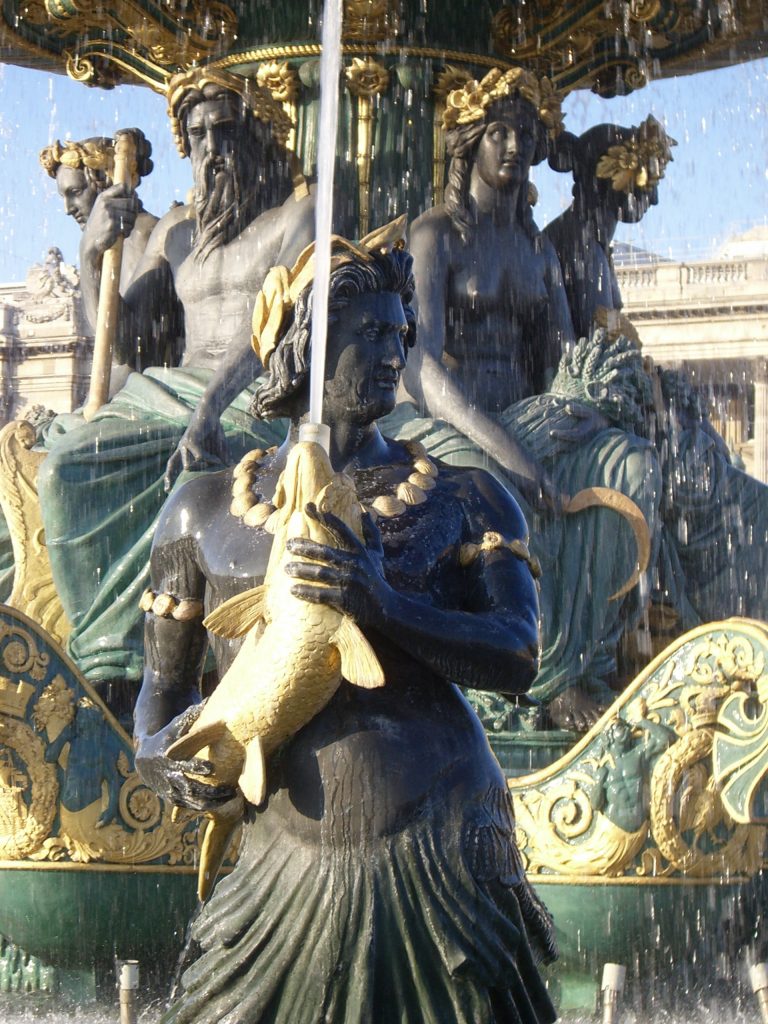 See? He doesn’t look laggy. It must be the rarefied French air. 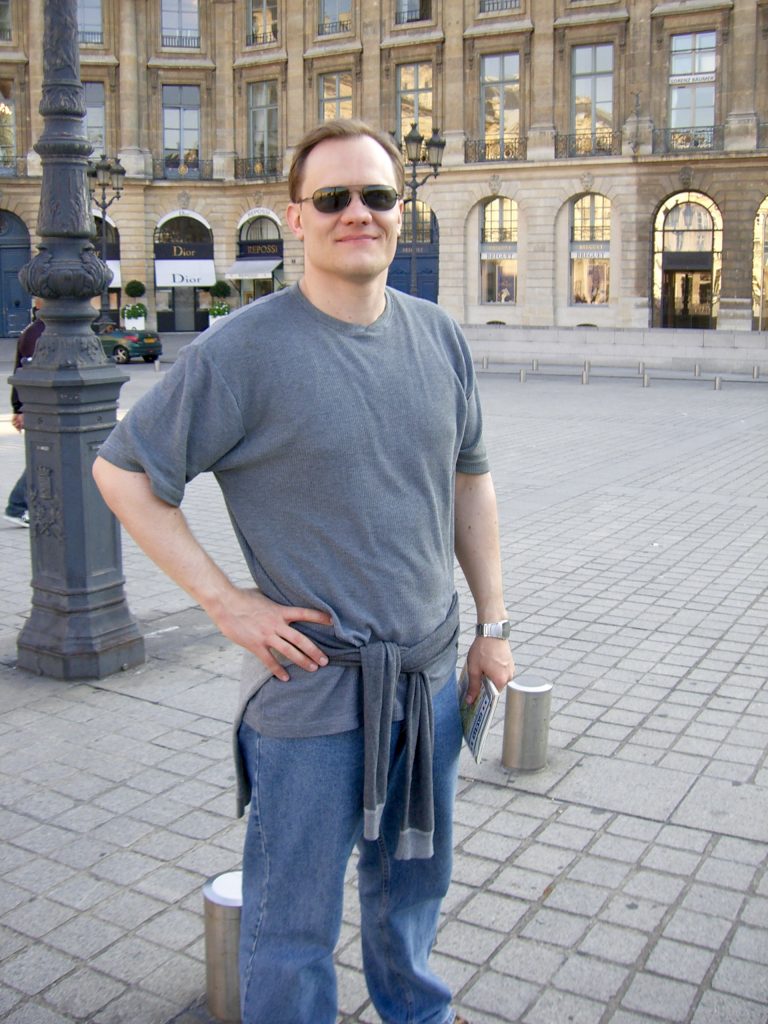 Our hotel was nestled on a cozy street. I wanted to bring the car (at right) home with us, but that would’ve been tricky. 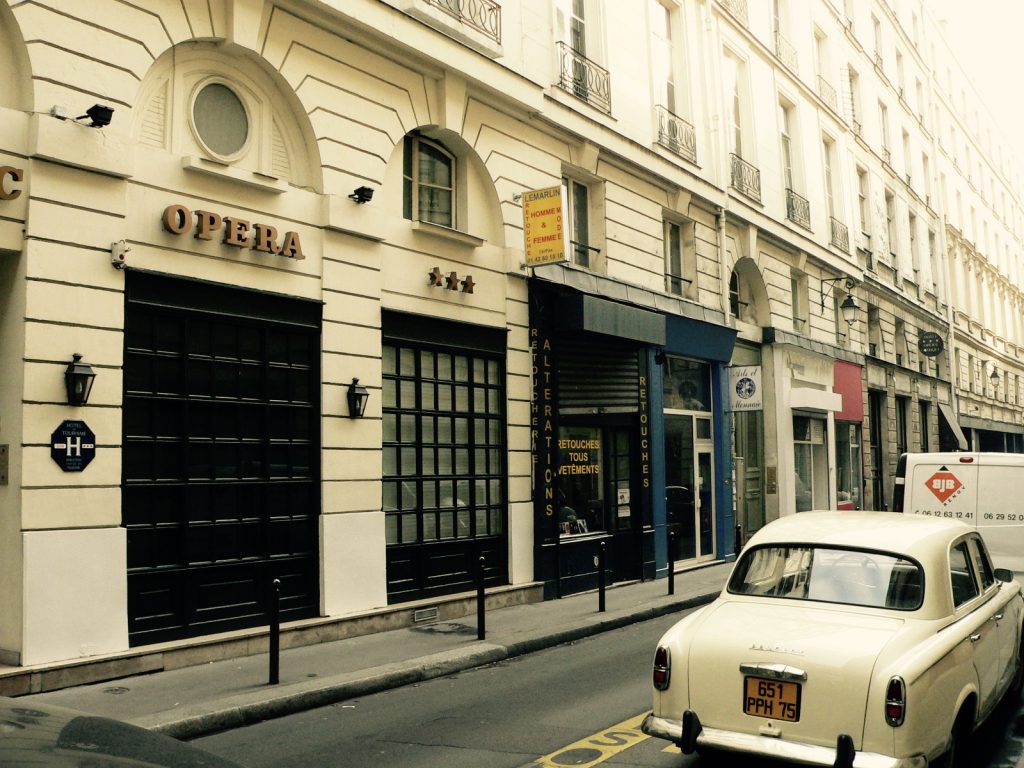 We had to climb a lot of stairs to reach our room. But they were chic stairs. 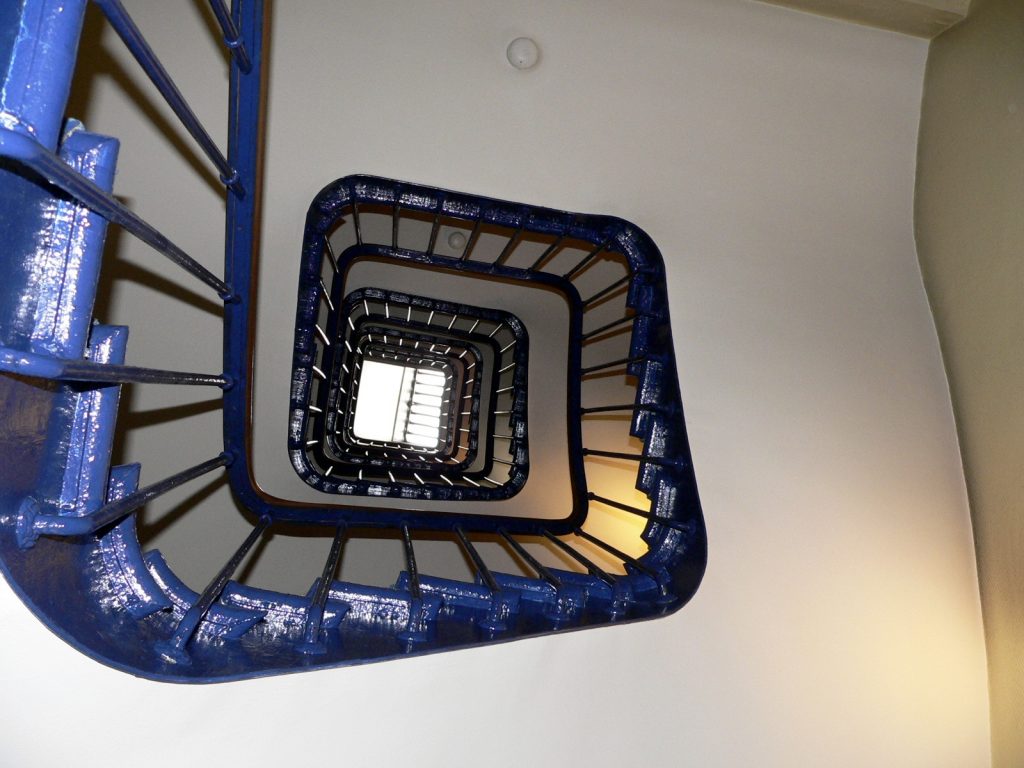 This is one of my favorite memories. All of Paris is art. If you have air in your lungs, it’ll inspire you to be more creative. Or at least to eat a warm baguette with chocolate, and drink wine with lunch AND dinner. 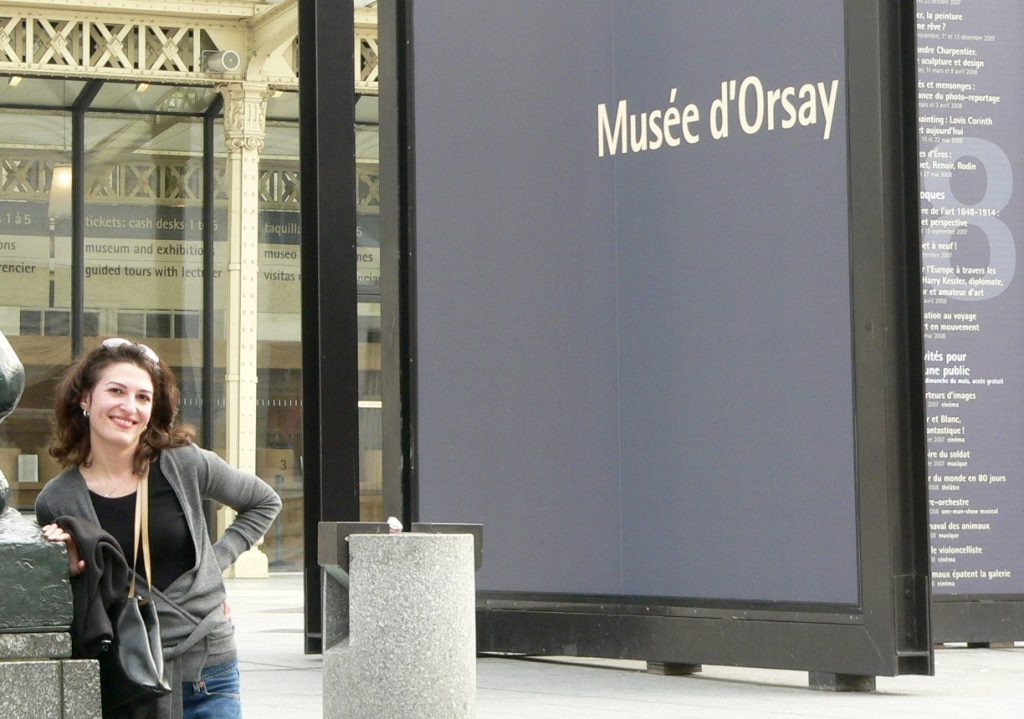 A horse outside the museum. 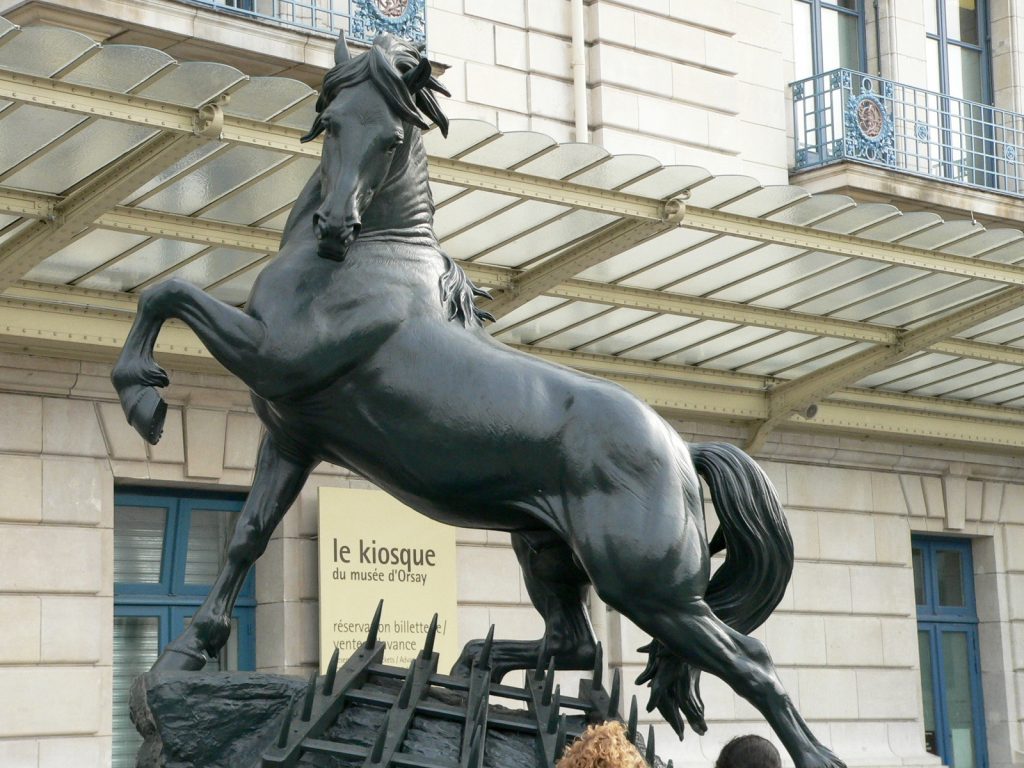 We spent one afternoon sorting out our train tickets to Nice, at Gare du Nord. I was grateful Matt grew up speaking French. There were a lot of details to sort. If I had to sort them, we would’ve landed in Finland. 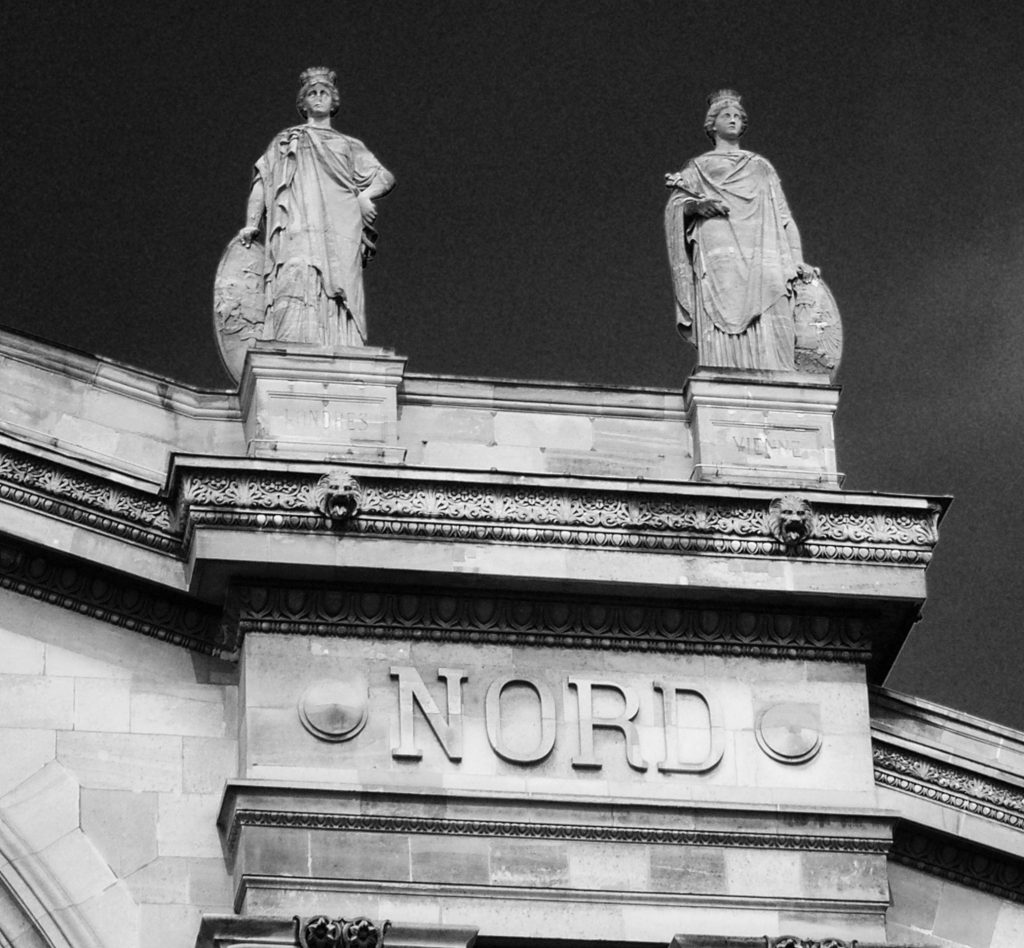 As we walked back to our hotel, I caught a shadowy glimpse of Sacre Coeur, a gleeming church on a hill overlooking the Montmartre neighborhood. 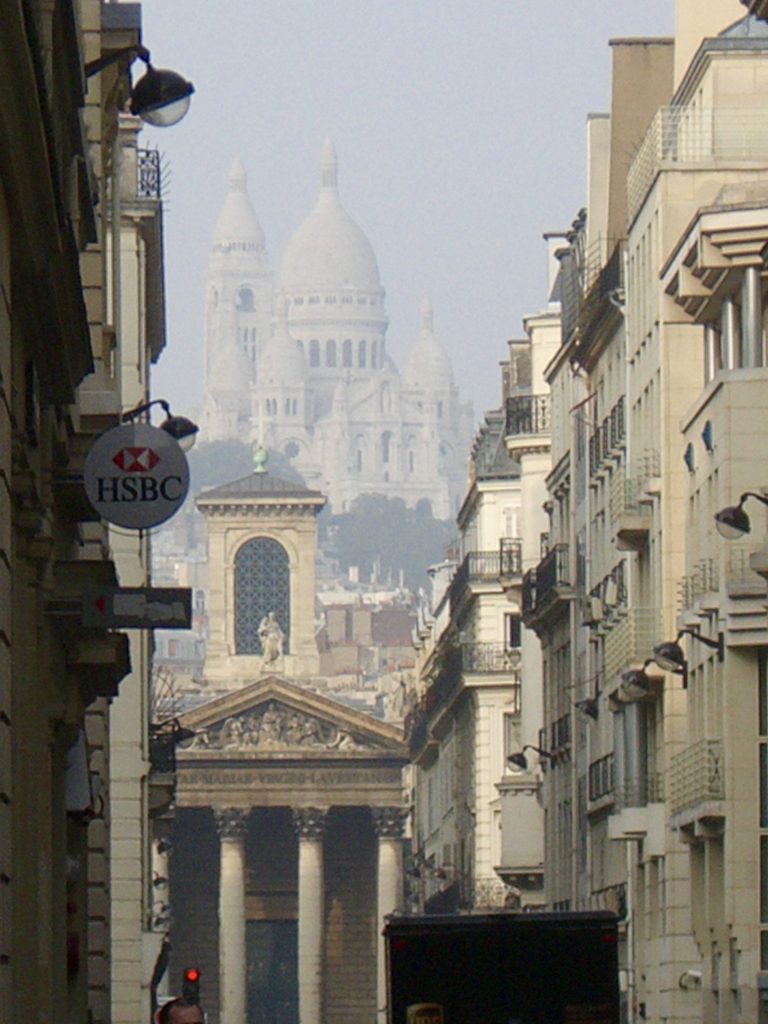 A building along the Seine. 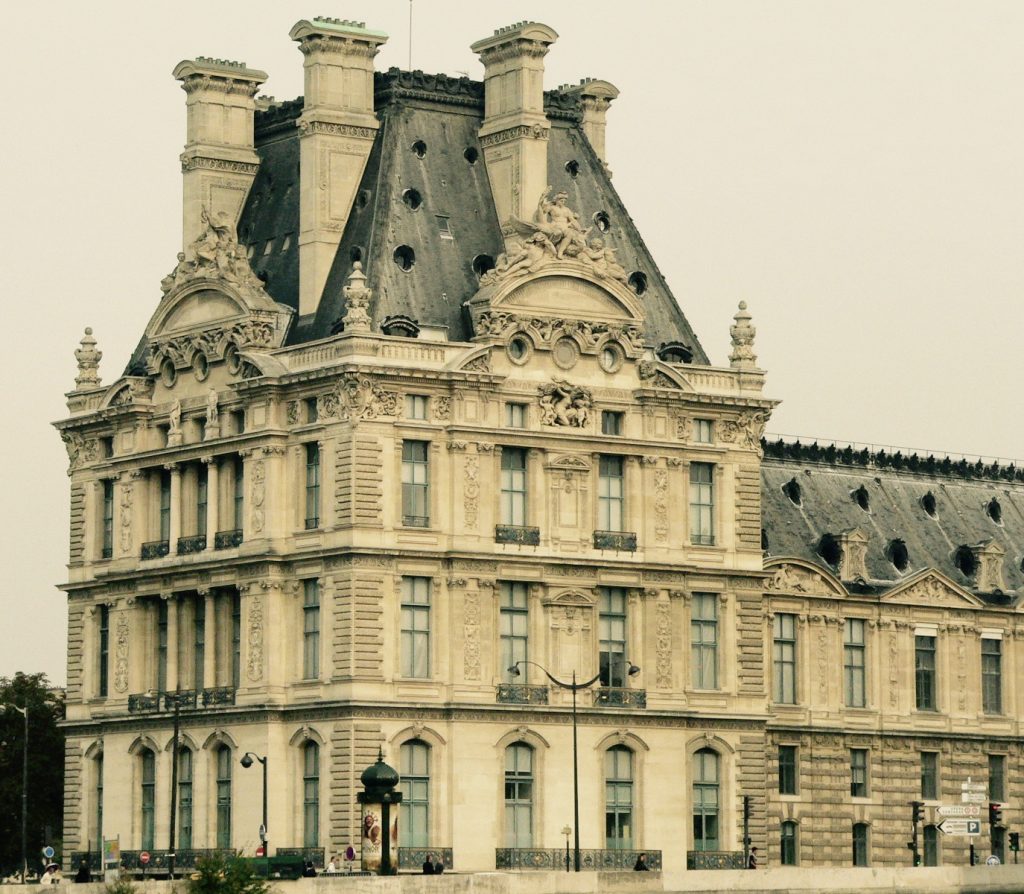 The first time I visited Paris was April 1998. April in Paris is enchanting–it would have to be, wouldn’t it, to inspire a song by the same name? But October in Paris runs a close second. Gloriously so. 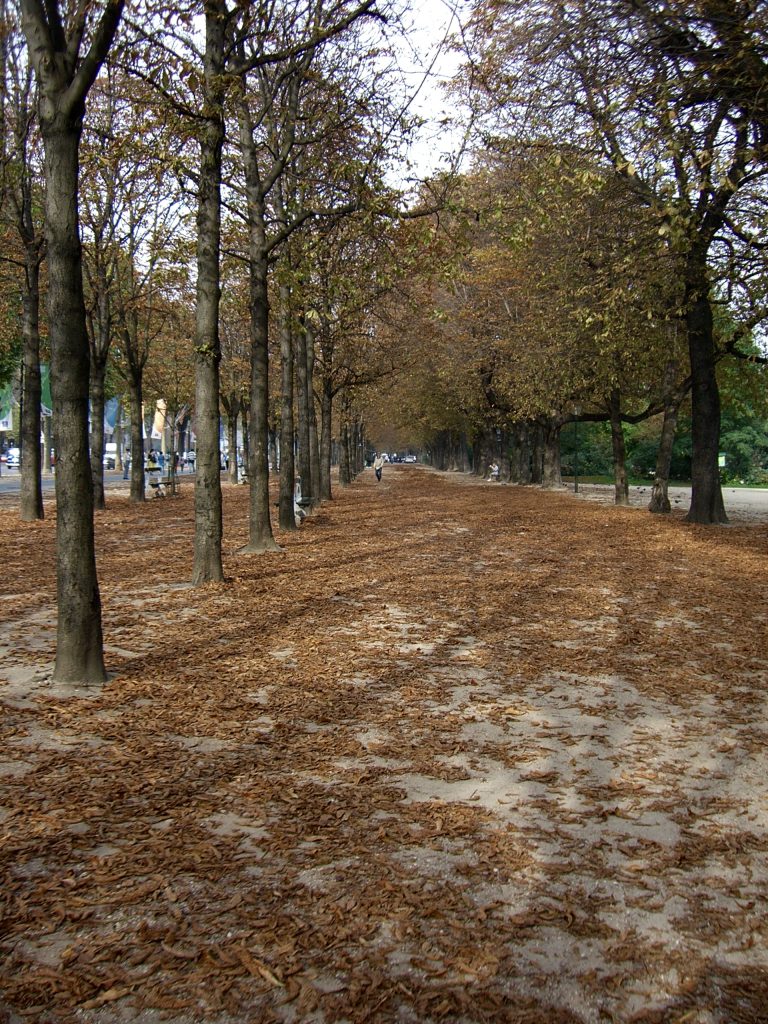 Most photos by Kristina Cowan. The ones of the author herself were taken by, well, her other half–Matthew Cowan.