Excellent public schools, world-class libraries, pristine parks and green spaces—this is the stuff of a young family’s dream. It’s also the stuff of Naperville, one of Chicago’s southwest suburbs. Families flock to Naperville because of the strong reputation of its public schools. It’s also home to some of the highest property taxes.

A decade ago, we were a young family fleeing the city in search of good schools. With an infant in tow, we landed in Naperville. We didn’t dream of sending our son anywhere but the public sector—until he was on the brink of kindergarten.

Our designated school wanted to enroll him in their English Language Learners (ELL) program. ELL is meant for students with limited English proficiency. My son’s first language is English. He’s never struggled with language. But because my husband was born and raised in France and speaks French fluently, the school said it was required to place our son in ELL.

When we challenged the confusing plan, the principal gave us two choices: We could shred our original form and claim no French connection, or deal with ELL. Instead, we looked for a different school.

That’s when we found Covenant Classical School. A private Christian school with rigorous academics, it was only five years old at the time. Within two weeks of classes starting, Covenant accepted Noah for the last spot in kindergarten.

We were relieved to find educators focused on our child, without the sometimes-arbitrary influence of state law. In the time since, Covenant has meant far more.

I still believe public schools achieve great things. They turn out some of the best-and-brightest students. They’re filled with hardworking teachers who love children. Yet our particular public school had disappointed us.

My son is now in his sixth year at Covenant, and in fifth grade. My daughter is in second grade there.

As they dart out the door each morning, we know their hearts and minds are loved, guarded, and guided by teachers with a steadfast dedication to children and learning. It’s a wide-and-deep education that’s readies them for college and careers. But it’s more than that.

Why is it more? Part of the answer lies in a three-part process at the heart of classical-Christian education. It’s simple, and complex.

During the youngest years, children study and memorize facts. In middle school, they ask questions about what they’ve learned, focusing on cause and effect and thinking through arguments. In high school, students practice persuasive self-expression, building on all they’ve learned.

These three stages are a classical pattern called the trivium. Rooted in ancient Greece, the classical model is the basis for the liberal-arts tradition of schools and colleges, where students study each academic discipline in pursuit of a broad education. In K-12 classical schools, academics are organized according to the first three of the seven liberal arts: grammar, logic, and rhetoric. These also correspond to stages of human development.

As a child moves through the stages, they possess different strengths and learning abilities. The classical-Christian model harnesses those strengths. At its core, the curriculum is based on what’s best for students. Teaching isn’t centered on simply helping them perform well on exams.

Grades K-5 are called grammar school. Not because, as Susan Wise Bauer points out, children spend that time learning English. “Grammar” refers to these as foundational years. Whatever students learn in the future will be built upon them, just as language is built on good grammar.

Memorization is fun for kids at this stage. They meander through math facts and phonics rules; spelling, grammar, and poems; vocabulary of foreign languages, including Latin, which begins in third grade; stories of history and literature; descriptions of animals and the human body, and more.

At Covenant, singing, chanting, and hands-on activities have helped my children with memorization. I’ve watched their knowledge base grow. If I need to know the date of a far-flung event in history, asking my son is faster than Google.

In grades 6-8, students think more abstractly. They’re curious about how everything fits together into a logical framework. During these years—aptly called logic school—they wrestle with those questions and find answers, applying logic to all subjects.

The logic of writing, for instance, focuses on constructing paragraphs and supporting a thesis. When it comes to the logic of reading, students learn to analyze and critique different literature.

High school, also called rhetoric school, is when students apply the rules of logic to everything they learned in their early years. They form conclusions and express them in well-developed, convincing prose, both written and spoken.

From start to finish, classical educators help students examine links between different fields of study. It’s hard work, but the payoff is great. To accomplish these connections, the curriculum centers on history.

Classical students work through Susan Wise Bauer’s historical series, The Story of the World, an engaging, easy-to-read set of books. Parents have been known to enjoy them, too.

Starting with the ancient world and progressing to the modern day, students memorize key events in history, science, literature, art, and music. Each week at Covenant, students gather to recite different parts of the history timeline, in a verbal practice called recitation.

Classical-Christian education is language-focused, instead of image-driven. This is key, Bauer says, because the two demand vastly different habits of thought: “Language requires the mind to work harder; in reading, the brain is forced to translate a symbol (words on the page) into a concept. Images, such as those on videos and television, allow the mind to be passive. In front of a video screen, the brain can ‘sit back’ and relax; faced with the written page, the mind is required to roll its sleeves up and get back to work.”

What could be more important to the rising generation, surrounded by our image-driven, internet-saturated world? They’ve not known a time without technology at their fingertips, without Google and Fortnite and social media. If we don’t hold the bar high and require their minds to work harder, we run great risks.

Author Nicholas Carr’s research has shown that our increased reliance on the internet rewires the way our brains work. For all of its conveniences, the web distracts us and saps our creativity. We have less time to read printed books. Even if we start them, our depleted attention spans often prevent us from finishing. Though we’ve learned how to skim for information online, we’re losing the ability to dive deep into great literature and do the critical thinking life demands.

This is not what I want for my children.

Thankfully, Covenant doesn’t want that, either. My grammar-aged children don’t use devices in class. They won’t for a while. I don’t worry about their technological dexterity, because they get ample screen time at home.

Technology is useful, to be sure. As adults, our children will face even greater advances than we’ve seen. Some will rely on it heavily for their livelihoods. It’s our job to teach them to use it wisely.

Studies at Covenant are rigorous. They demand time, critical thinking, and effort. The children rise to the challenges, and often find great joy in meeting them. It’s as if the work they do multiplies their curiosity.

In fourth grade, my son and his class traveled back to when all things were new in Europe: the Renaissance. Each student selected a Renaissance man or woman to research—artists, explorers, scientists, or royalty. For several weeks, they labored over research, developed outlines and rough drafts, and perfected final papers and visual aids. They shared their final presentations in class.

A few days later, they hosted a Renaissance Fair for the entire grammar school. During the fair, the students transformed into the people they had studied. They showcased what they learned and spoke in the first person about circling the globe, painting the Sistine Chapel, or inventing a flying machine.

The Renaissance Fair is a form of embodied learning, when students use their bodies to experience and learn about a subject. I watched as my son and his friends rose to a bar set high, and flourished during their journey. Today, school; tomorrow, the world: My son points Magellan’s way around the globe for onlookers at the 2019 Renaissance Fair. Photo by Lisa Eekhoff

Building What They Know, and Who They Are

Because of Covenant, my children learn to think creatively, independently, and analytically. They push the envelope in the right ways.

Their teachers model social and emotional intelligence—and spiritual wisdom. Their faith is stronger because of the instruction they receive in scripture. More than just Bible verses, the teaching examines the work and life of Christ, and considers how it should influence our daily lives.

As they study different subjects, students have the freedom to examine what they’re learning through the prism of their faith. The ancient Greeks, for instance, worshipped a variety of Gods. Second graders learn all about them. How is this worship similar to or different from the beliefs of someone who follows Christ? These types of instruction help students better understand what they believe, and how to explain it to others.

Class sizes are between fifteen and eigtheen students. The intimate numbers foster strong connections between teachers and students. Teachers have time to pay close attention to each child. They discover where each student’s strengths lie, and what challenges them.

Though standardized tests aren’t the coin of the classical realm, our students outperform their peers. According to 2015 data from the Association of Classical Christian Schools (ACCS) and the College Board, the average SAT scores of ACCS students in reading, math, and writing were 608, 588, and 591, respectively—well beyond the scores of their peers at independent, religious, and public schools.

More important than test scores is how our students navigate life once they leave the school’s safe harbor.

“We’ve found they do very well regardless of their next step. [T]his is an education that’s not just meant to prepare you for college or even a job, but for life in general. We’ve found that all of our graduates who have come through the program are able to accomplish our goals, which are to think well, and to analyze well, to speak well, and be able to show their beliefs and what they think. They’re wrestling with big ideas all the time in school, so when they come upon a problem later on in life, they are able to wrestle with it well—logically and critically, and also to be respectful, and intellectually humble as they go into life.

Author and educator Neil Postman said “our children are the living messages we send to a time we will not see.” The classical-Christian model makes sure those messages preserve the value of both education and faith. Nothing matters more. 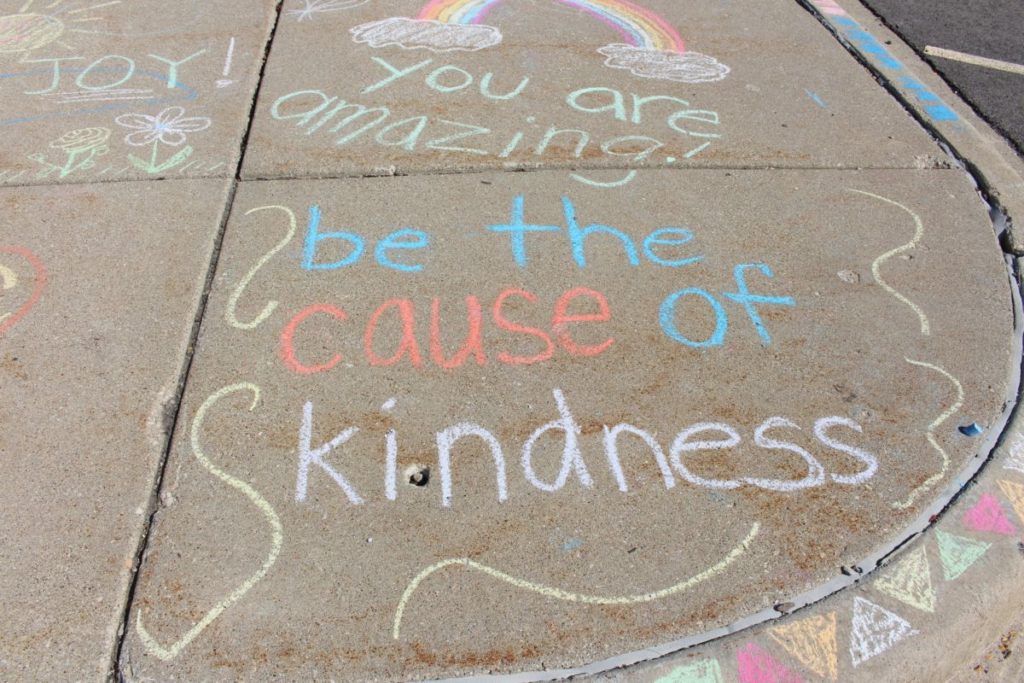 Parents and students decorated the sidewalks leading into our school at the start of the 2018 school year. Bible verses, encouraging phrases, and art welcomed everyone—and eased nerves.