My mom passed away from complications of breast cancer 29 years ago. My brother died five years ago, after a battle with severe depression. Last month my dad’s heart failed while he was out for a drive. Though he was revived and brought to the hospital, he had extensive brain damage, and he faded a week later.


As my sister and I crafted Dad’s obituary, we had a few things to consider. Our family is a blended one, twice over: when Dad met Mom, she was divorced and with two children, my brother and my sister. Her first husband had abandoned them. Dad and Mom married and created the first blend, and within a few years, I was born. Almost a decade later, my parents divorced, in 1984—something that still grieves me. Mom passed away in 1989, and Dad went on to date and eventually remarry, in 2002. That was the second blend.

Blended families have sensitivities that don’t exist elsewhere. The relationships and dynamics are different—not stronger or weaker. When a parent dies in a blended family, unique situations arise. The obituary is one of them. Should we include Mom in the official obit? No, the funeral coordinator rightly said, because our parents were legally divorced. Out of respect for my stepmom, who’s been gracious, kind, and supportive of my dad—and who was by his side for 34 years—we didn’t include my mom in the formal tribute.

Instead, I’ve included her in the version below. My faith tells me the issues that led to my parents’ divorce, trivial as they were, no longer matter. I believe they’ve reconnected in heaven, where they have more important things to discuss. Dad, for instance, needs to catch Mom up on her seven wonderful grandchildren. 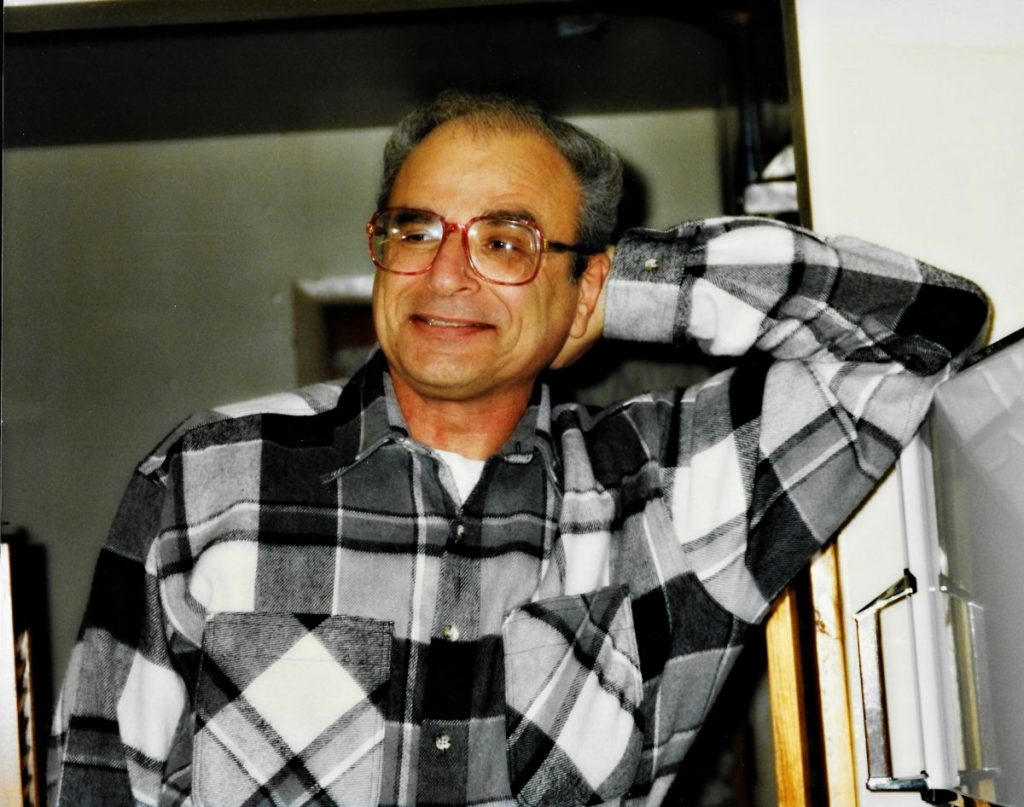 Dean John Lane (Leakos) slipped peacefully into forever on Friday, July 6, 2018, after a bout of cardiac arrest. He was 82.

Born on July 24, 1935, Dean was the son of Greek immigrants, Ann and Nick Leakos. As a young man, he developed a strong work ethic that came to define him, and he strived for excellence in all he did. He served as an altar boy at Annunciation Greek Orthodox Church in Cleveland, something he reflected on with pride. It was there that his faith in Christ took shape, and it anchored him for life. 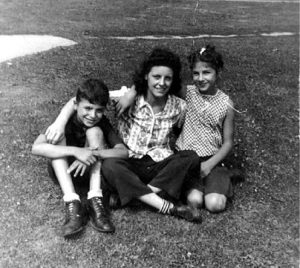 Dean with his Aunt Venice and his sister, Daphne, circa 1945

He spent his childhood summers in Lisbon, Ohio, making a slew of happy memories with his yiayia, Olga, and uncles Harry, George, and John, and aunts Zara and Mary. During his school years, he worked in a candy shop. It wasn’t long before he gained a keen appreciation for all things sweet. His love of donuts never waned. Anytime you stopped into Dean’s kitchen, pastries and cookies lined the counters and cupboards. He believed food to be one of life’s great joys.

He excelled in academics, earning high marks at East Tech High School in Cleveland. He showed promise in the arts and sciences, and considered attending college and becoming an engineer. But after his high-school graduation, Dean enlisted in the U.S. Army. Stationed first in Europe, he spent three years in Germany and the Netherlands, as a low-speed radio operator. He also worked on tanks, was decorated as an expert in the M-1 semiautomatic rifle, and received a good-conduct medal. Returning to the States in 1958, he transferred to the Reserves, a position he kept until 1963. 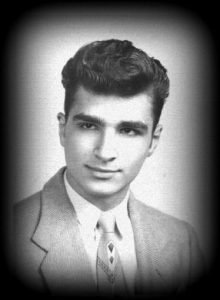 In his early 20s, Dean applied for a chauffeur’s license. This picture was part of the application.

Towering over most people, Dean grew to be six feet, four inches tall. He had dark, curly locks, chocolate-brown eyes, and olive skin: the quintessential Greek man. He was the second eldest in a large family of cousins, and became like their older brother. Treating them to rides on his boat, giving them too-early chances to zip around in his prized 1960 Dodge, escorting them on trips to the drive-in theatre—he knew a life of merriment and strong family ties.

A love of heavy machinery was a hallmark of his life. Tanks, boats, automobiles, big trucks, steam engines—he delighted in all of them. He often said driving a tank was his favorite thing to do.

Life after the military held new horizons for Dean. He soon found his niche in two gigs: as a Parma Auxiliary Police Officer in suburban Cleveland, and as a mail carrier for the U.S. Postal Service. Dean reveled in both jobs. Residents along his postal route lavished him with gifts, especially at Christmastime—crates filled with citrus fruits, cakes, and libations. He was a smart addition to the Auxiliary Police force, and made people feel safe simply because of his tall, authoritative stance.

It was at the Post Office that Dean met his first wife, Karen, in the mid-1960s. Mothers didn’t tend to work outside the home back then, but Karen had to after her first husband abandoned her with two small children, Lisa and Jim. Dean and Karen married, and he helped raise the children as his own. A few years later a third child, Kristina, was born. In the mid-1980s Dean and Karen parted ways. They shared custody of Kristina, and remained amiable.

At Lisa’s wedding, February, 1988: Dean; his daughter, Lisa; her husband, Jim; and Karen

With a sharp wit that often edged into sarcasm, Dean appreciated the arts and music. He was conversant in everything from traditional Greek music to 1980s pop to classical. Turner Classic Movies was one of his favorite hobbies. John Wayne and William Powell were among his Hollywood heroes. He even looked to John Wayne when he changed his last name, in an effort to Americanize it. Thinking “Dean Wayne” didn’t sound quite right, he opted for “Lane” instead, because it rhymed with Wayne.

In the 1980s, he resigned from the Postal Service, and moved into a job as a hall monitor at Parma Senior High School. There he became fast friends with the students, knowing many by name, introducing them to his children when their paths crossed at high-school football games.

Dean stayed with the Auxiliary Police and at Parma High until he reached retirement age. He left with honors and awards for his dedication and service, for his impeccable performance in each position.

In 2002, he married Shelva Davis, also known as Jean. They built a home together on an idyllic patch of land in Columbia Station. There they enjoyed watching the birds, deer, and other wildlife that graced their property, bordered by a small forest. Dean loved traveling. Over the years he visited Hawaii; Maine; Nevada; Phoenix, where his mother lived; the Houston area, where one of his daughters lives; and Chicago, where his other daughter resides. He liked dipping into the different regional cultures and types of cuisine.

In retirement he enjoyed his vehicles and machines, and reading. A lifelong Titanic buff, there was little he didn’t know about the Ship of Dreams. He passed that love on to his youngest grandson, and they often had exchanges about the details of the ship’s sad and only voyage. Dean also kept up on current events, reading and watching the news each day. He pressed his children to stay aware of what was happening on the world stage. “If you don’t care about things, who will?” he was famous for saying. 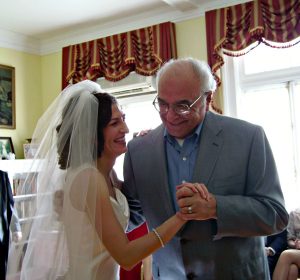 He was a loyal man, faithful to a fault when it came to those he loved. An extrovert at heart, he could strike up interesting chats with almost anyone. Thrilled to become a grandfather in the late 1980s, he took to calling himself “Old Grandad.”

Dean is survived by his wife, Jean, his daughters, Lisa Bogucki (James), Kristina Cowan (Matthew), his grandchildren, Jeremy, Nicholas, Autumn, Jimmy, Patrick, Noah, and Syma, and a wide circle of Greek cousins. Welcoming him to Heaven are a host of his beloveds, including his mom, Ann Leakos-Arnett; his sister, Daphne Collins; his son, James McLaughlin; his uncles, George, John, and Harry Serago; and his aunts, Mary, Zara, and Venice. 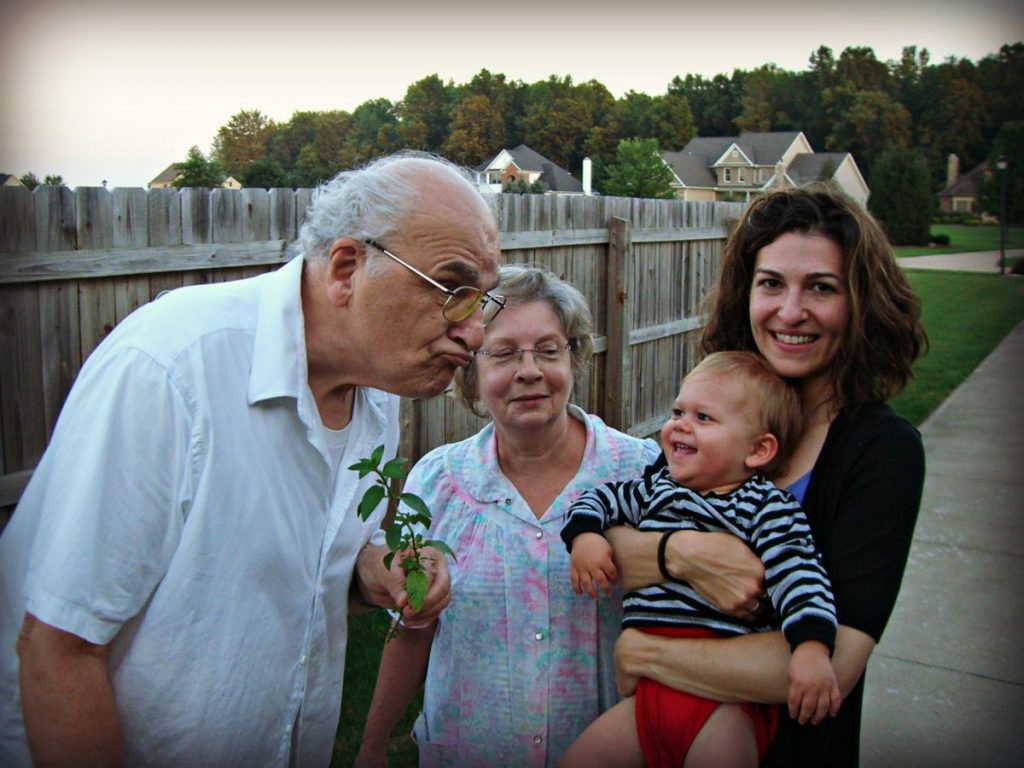 Dean lived to see all of his grandchildren born. What’s better?