Storytelling is part art, part science. The art is most of it—say seventy-five percent—and the rest, science. We need both to be successful. The science part reminds us of criteria to meet and elements to include if we’re to draw and keep readers.

The rest is more fun. It relies on our artistic intuition and creativity. A writer’s veritable sixth sense, it improves with time and experience. There’s no formula here. It’s limited only by the depth of our imagination and our willingness to refine our ideas.

In his book, Story Engineering: Mastering the Six Core Competencies of Successful Writing, Larry Brooks makes the case for this as he explains the first competency: concept. (I gave a broad overview of his book in a previous post.)

What is a Concept? 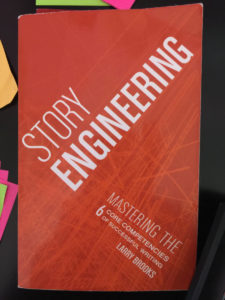 A concept is something that asks a question, and the answer is your story. It shouldn’t—but often is—confused with an idea, a premise, or a theme. An idea is more general. A premise is an expanded concept that introduces the element of character. And theme “is the essence of what a story means.”

Here are examples, based on Clive Cussler’s adventure novel, Raise the Titanic!:

Idea: A story about raising the Titanic

Concept: There are secrets still hidden with the Titanic that certain forces would kill to keep concealed.

Premise: An archetypal hero is hired to raise the Titanic and in the process, he saves his country from a potential attack.

Criteria for a Concept

This stacks up to be rather confusing, especially for those of us not in the habit of writing fiction. To clear up confusion, Brooks offers several criteria to determine if you have a true concept—or something else.

1. Is it fresh and original? Be specific in stating your concept, and give it a compelling edge. Break the boundaries of predictability for your given genre, whether it’s fantasy, romance, or historical fiction.

2. If it’s not super-fresh and edgy, does your concept pose a new spin on a familiar theme or premise? Brooks says it must “evolve to a place where there is at least something about the notion that brings an element of compelling freshness, unpredictability, and curiosity to it.”

Think of Murder, She Wrote. The concept is quaint, but not ultra-fresh: a sweet, elderly woman solving tricky crimes. What’s fresh, Brooks says, is that she should be tucked away in happy retirement; instead, she’s doing something normally under the purview of “cynical middle-aged gumshoes with dark pasts.”

3. It should set the stage for an unfolding, dramatic story. You must be able to do two things with a concept: drill down into it, and build upon it. Drilling down means finding out how your concept leads into a storyline. Building up means discovering higher-level “what if?” questions. This ascending and descending work begins to set the dramatic stage for your story:

Right here, at this point in the development process, is where it becomes critical that the writer understand what story is, at its most elemental level: After a hook and a setup the hero begins a quest, the pursuit of a need or a solution, from which springs a specific goal (survival, revenge, happiness, health, peace, wealth, justice, etc.), and then must square off with and ultimately conquer (or not) obstacles—this being the most critical element of storytelling: conflict. You then toss in a few inner demons as well as some exterior antagonistic forces, giving the hero something to battle and outwit and conquer as he strives to reach his goal. A good concept makes all that easy to buy into.

4. Does the concept lend itself to the other three elements of storytelling (character, structure, theme)? A good concept feeds into rich characters who set out on engaging journey (structure), during which a powerful theme(s) is/are revealed. Along the way, your readers will recognize elements of their own humanity. Your story becomes something bigger than itself, taking on new and varied meanings. That’s a successful piece work.

5. Can the concept be expressed as a succinct “what if?” question? This is probably the most important of all criteria. Hammering your concept into a “what if?” question clarifies your story and leads to a string of other “what if?” questions. You should use these questions to move up, to “higher conceptual ground,” forward, into story details, and deeper, into character and theme.

Ultimately, this tool helps you see one of two things: Your concept is even better than you thought, or it won’t work at all.

Knowing If Your Concept is Good Enough

Surety isn’t guaranteed when it comes to concepts. (Remember the art+science equation? This is the art part.) We must rely on our artistic sense to tell us what works and what doesn’t. This is developed over time and with experience. “The successful have a knack for picking the right ideas,” Brooks says.

As you sharpen your acumen, keep a few things in mind, Brooks says:

1. Write the sort of book you enjoy reading. Pick a story you like, and execute it well.

2. Write from the heart, with passion, and from a place of hope and confidence. Rely on a set of principles to develop your plan.

3. Write because you have a deep need to develop and reveal a specific story. Don’t write to show off your storytelling skills.

Stay tuned for my next post, on character development.