Two decades have passed since 9/11, and I still haven’t seen a sky as blue as it was on the East Coast that morning. The crystalline backdrop stood in stark relief to the day’s senseless horror.

September 11 unfolded into a day of contrasts: sheer evil and absolute good; silence and noise; horror and humanity. Countless acts of humanity—unremarkable on any other day—saved lives and spurred hope.

May we never forget.

“Never forget” has become the rightful moniker for 9/11. If we don’t preserve that day’s significance—by retelling its accurate history to our children, and to each other—we’ll forget. Forgotten history repeats.

A firefighter who was at the Twin Towers on 9/11 spoke recently on the radio. A young woman had asked him about it, nonchalantly saying she had heard that a plane had crashed into a building, or something. It left him dismayed. If that young woman represents what rising generations understand about that day, we’re failing.

This essay is my contribution to preserving history.

I lived minutes away from the Pentagon on 9/11, working as a higher-education reporter in Northern Virginia. I covered the stories of some of the hijackers—one slipping into the U.S. on a student visa—and of a Lower Manhattan college that lost students.

At the time of the attacks, I had only been in the D.C. area for a year. I wondered if I should be there. The world, after all, seemed on the brink of extinction. Soon after 9/11, an anthrax scare and a sniper plagued Washington. More proof of the end of the world.

Yet my post-9/11 reporting became some of my most important work. Like most of America, I was awakened to sobering realities. The chance to document them from the nation’s capital was an upside. It didn’t take long for me to realize that God had me there for such a time as that.

Thousands Murdered in the Worst Attack on U.S. Soil

On Sept. 11, terrorists slammed two jetliners into each of the Twin Towers, one into the Pentagon, and crashed the fourth in a Pennsylvania field. The day broke with the ever-ripe promise of summer melting into autumn, and all the possibility of a new season. The morning’s natural beauty made it even more jarring when the jaws of hell opened, devouring nearly three thousand innocent people. 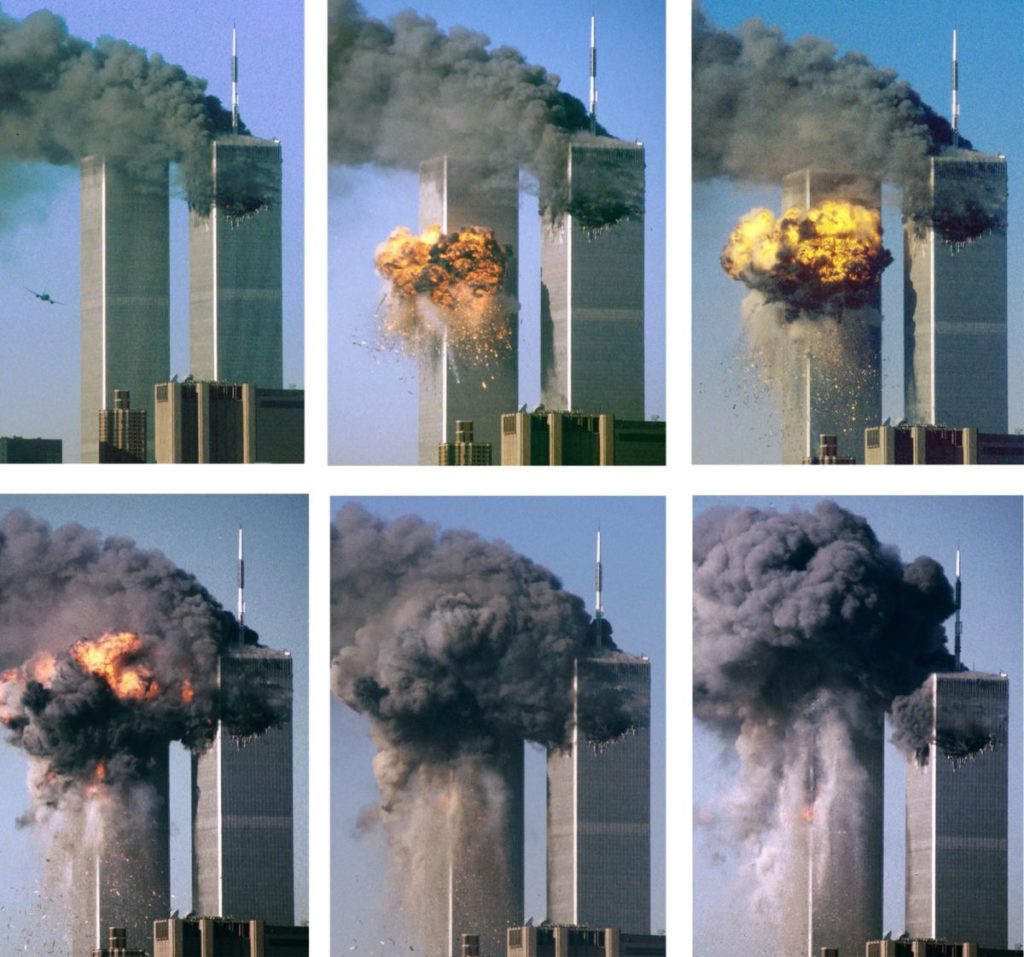 Hijacked jetliners struck the North and South towers of the World Trade Center on the morning of Sept. 11, 2001. Photos by Sean Adair/Reuters/Corbis

Both towers fell, decimating Lower Manhattan. The southwest side of the Pentagon was left with a two-hundred-foot chasm.

Nineteen men executed the pernicious assaults. Tapping into America’s good will and our flawed immigration and airport-security systems, they boarded four commercial airplanes at East Coast airports, all California-bound. These extremists selected cross-country flights because the planes brimmed with fuel. They seized control of them and pointed them toward buildings filled with symbolism, significance, and most importantly, people.

The men were Islamic terrorists who had trained with the al Qaeda terrorist network in Afghanistan. Osama bin Laden, son of a billionaire construction magnate, was al Qaeda’s founder. He had declared a holy war on the United States and was harbored in Afghanistan by the Taliban. Opposed to America’s support for Israel, our role in the Persian Gulf War, and our continued presence in the Middle East, bin Laden and his al Qaeda extremists sought vengeance on the United States. 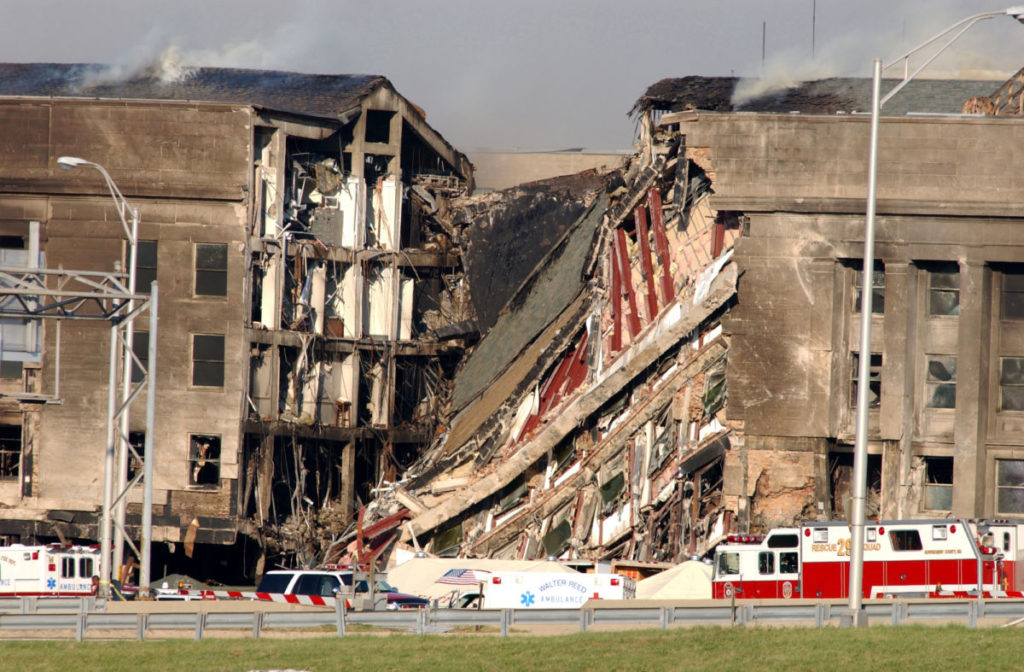 American Airlines flight 77 crashed into the southwest corner of the Pentagon, killing 125 people inside the building and all sixty-four aboard the plane. Photo by the U.S. Navy

It wasn’t just Americans who died on Sept. 11. The terrorists murdered citizens of seventy-eight countries. The destruction in New York alone was worth about sixty billion dollars. Among the dead in Manhattan, 343 were firefighters, twenty-three were police officers, and thirty-seven were Port Authority officers. Eight children, between the ages of two and eleven, died on the planes.

Those who perished died brutal deaths. On the planes, the hijackers used boxcutters and mace to stab and subdue some crew members and passengers. In the Towers, people were set on fire as jet fuel streamed down elevator shafts.

Many were pummeled by debris from the planes and Towers. Others were forced to make an impossible choice: Jump from a hundred stories up, or be burned alive? Some died instantly, at the planes’ points of impact. The remains of more than a thousand people who died at the World Trade Center haven’t been identified.

To have lived in New York or D.C. on 9/11 is to remember it as a day filled with foils. Crash sites consumed by darkness and death, pressed against a radiant blue sky—brighter than anyone could remember. Good and evil spiraled into a double-helix. In the face of the terrorists’ savagery, those fleeing the crash sites became selfless heroes as they saved each other. Firefighters and first responders sacrificed themselves to shepherd untold numbers of people to safety.

Like the Titanic passengers who believed the ship unsinkable, it didn’t occur to us that anything could topple the Twin Towers or split apart the Pentagon. The Pentagon is our military fortress. The Towers were the windows on the world of Manhattan, the glistening gateway to America.

In New York, you catch a glimpse of everywhere. It’s more than a window on America. Like the beloved restaurant that sat atop the North Tower of the World Trade Center, New York is a window on the world. A cultural melding of everyone from every corner of Earth. In one breath, you soak in the best of American ingenuity, determination, and greatness. Tom Wolfe said, “One belongs to New York instantly. One belongs to it as much in five minutes as in five years.” New York has its downsides, but no city—no nation—is perfect.

More than anywhere else, America points to opportunity. Immigrants—including my grandparents—have flocked here because they recognize that. My grandparents left their beloved Greece because of political and economic upheaval in the 1920s. Endless fighting between the Greeks and Turks meant they saw family and friends slaughtered. They headed to America knowing it would provide what their country did not: a safe harbor for pursuing opportunity.

It would be a challenge to raise a family while acclimating to the new culture. They would work harder than ever. In exchange, they would find shelter, liberty, and freedom. The tradeoff was worth it. They grew to love the United States. This would be their country now. They would help build her into something even greater than she already was.

My grandparents’ work ethic and love of America set the tone for the rest of us. We haven’t been here long—only a century. But we have served America well, as policemen, entrepreneurs, pastors, professional soccer players, members of the armed forces, business executives, doctors, writers, and automotive experts, to name some. If my grandparents hadn’t taken a chance in coming here, and if America hadn’t taken a chance on them—none of this would exist. 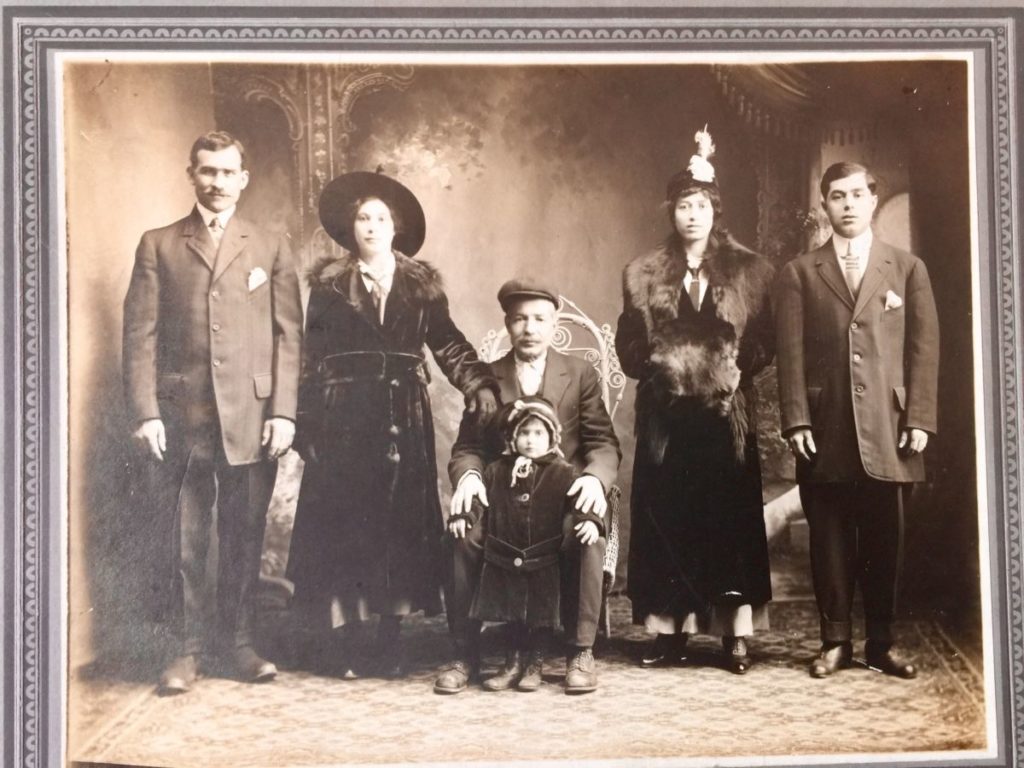 My grandparents sought freedom and opportunity in the United States when they fled Greece in the 1920s.

Liberty, freedom, and opportunity. These made all the difference for my grandparents, as they have for many immigrants. They are the hallmarks of the American way of life.

On 9/11, the terrorists assaulted our political and financial capitals because of symbolism and the way of life they represented. The attacks seemed to catch everyone by surprise. They forced the average American to recognize that we have enemies. Some will do whatever it takes—even give their own lives—to destroy our way of life.

The origins of 9/11 had deep roots, stemming from the war between the Soviet Union and Afghanistan. Bin Laden fought in that war, and later helped develop the financial platform for al Qaeda. His terrorist network carried out several attacks on U.S. interests before Sept. 11, including one on Black Hawk helicopters in Somalia in 1993; a 1995 car bombing in Saudi Arabia; the 1998 bombings of U.S. embassies in Kenya and Tanzania, and suicide bombings of the U.S.S. Cole in 2000.

Hindsight suggests we could have connected the dots. We should have done more to protect our vulnerable spots. Our leaders dropped the ball in terms of intelligence and planning for such attacks. But hindsight often renders perfection. As a free society, America has more vulnerable spots than we could reasonably try to protect.

If the 9/11 hijackers sought to divide and weaken the United States, they failed—at least initially. The days and weeks after the attacks are the last time I remember Americans coming together to focus on what we all have in common: love and appreciation for this country.

Being an American is a gift worth defending and preserving. America’s ideals—freedom, liberty, and opportunity—come with a price. They’re delicate. The only way to maintain them is by working together. In the days following 9/11, we recognized this.

We must do more than remember these truths. We must live them out. The future of our country and our children will depend on it. 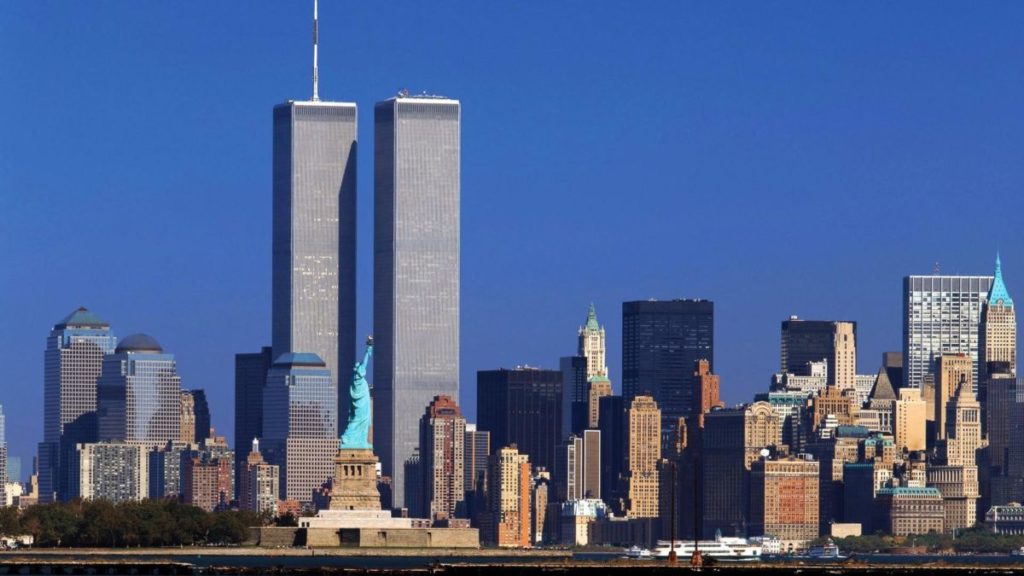