On Sept. 11, 2001 I lived in Arlington, Va., a few miles from the Pentagon. When terrorists slammed a jetliner into the famed fortress, I was riding the subway to work, temporarily unaware that my city and my country were under attack. At work I huddled with friends around a portable TV. We watched the towers fall. Our cell phones and land lines lapsed. The diamond-blue sky went silent, and so did we. 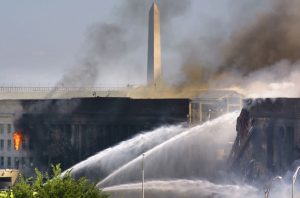 The Pentagon burns after a hijacked American Airlines flight crashed into it Sept. 11, 2001. (Reuters/Hyungwon Kang)

I was terrified. But not for long.

Along with the rest of the Washington press, I was called to cover the terror. As an education reporter I didn’t think my work would take me to a war zone in the middle of Lower Manhattan. But there I was, visiting a New York college that lost students at ground zero.

The worst terrorist attacks on U.S. soil ushered in the best season of my reporting life. Foisting me beyond my comfort zone, it made me a better journalist. I covered dark tales of the hijackers who had lived among us, taking flight classes and getting student visas. Complicated enterprise stories developed around student-visa reforms and international education. The most challenging pieces were about the physical and emotional devastation at the New York school. Though focused on ruin, they revealed the gritty resilience and dynamic character of New Yorkers.

In Washington, the horror of 9/11 lingered and morphed: next came the anthrax scare, and in 2002, the sniper attacks. “Pick your peril,” I said to my then-roommate as we watched the insanity of the news break. You could die from opening the mail, walking to the subway or working in a skyscraper. For days I read special obituaries compiled by The New York Times. My fear-saturated senses kicked into high-alert.

The nightmare at the finish line of the 117th Boston Marathon reminded me of 9/11. Like many Americans, I’ve wondered when and where the next attack would be. 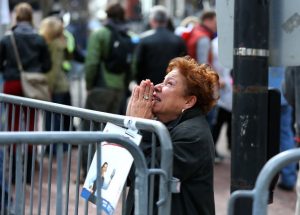 A woman kneels and prays at the scene of the first explosion near the finish line of the 117th Boston Marathon; April 15, 2013. (Photo by John Tlumacki/The Boston Globe via Getty Images)

As the week progressed, I flew back into the dreaded high-alert mode. Fear’s creepy claws scratched at the door. But emotion could wait. At least until the terrorists were captured.

By the time war broke out in the streets of Watertown, Mass., I sacrificed sleep to find out the latest—from online newspapers, TV and social media. One of my friends is an editor in D.C., and his Facebook updates were my primary source. The night of the Watertown shootout, I followed the Twitter feeds of two Bostonians at the scene, Seth Mnookin (@sethmnookin) and Andrew Kitzenberg ‏(@AKitz). I watched Mnookin’s list of followers grow by thousands in a short period of time. When Boston hunkered down last Friday, I did too. That day marked the end of the beginning of the story, and I wasn’t going to miss it.

I’m knee-deep in a book proposal, so these days I’m not covering the news for a publication. But I process life through writing, so this post is my effort to eek some sense out of the madness. Why do the terrorists—successful or not—hate us? As a follower of Christ, how should I react?

Reflecting on the Boston tragedy, Philip Yancey points out that Western worldviews run counter to those of Islamic fundamentalism: “The pendulum of society swings back and forth between ‘Anything goes’ and ‘Oh, no you don’t!’ Radical Islam swings one way; what its advocates see as the decadent West swings another.”

Freedom is the bedrock of America. It breeds fear, and it’s the wellspring of our strengths and weaknesses, Yancey says:

Much of the world views freedom with suspicion, focusing on its dark side. As they see it, Americans have the freedom to own assault rifles that kill innocent children; to pollute the Internet, magazines, music, video games, and movies with pornography and violence; to allow greedy bankers to wreak economic havoc; to proselytize anyone of another religion; to divorce and abort at will, undermining family systems; to gobble up natural resources while billions live in squalor.

Freedom is expensive. Many in our armed services are maimed or die defending it. Last week civilians were maimed and died simply because they were enjoying it. If this is a new season for America, I’m ready for the next one.

A recent devotion in Our Daily Bread says:

[W]hen pushed into the next season, we are often uncertain and even fearful of what it might hold for us. This is especially true of later seasons of life, when we are haunted by thoughts such as: Will I be left all alone? Will my health hold up? Will my money last? Will my mind stay fresh? As with every season of life, we have to make a choice—to waste the season in fearful thoughts or, as Paul says, make ‘the best use of the time, because the days are evil’ (Eph. 5:16 esv).

Regardless of your season, you can count on God’s faithfulness. He says, ‘I will never leave you nor forsake you.’ So we may boldly say: ‘The Lord is my helper; I will not fear’ (Heb. 13:5-6). 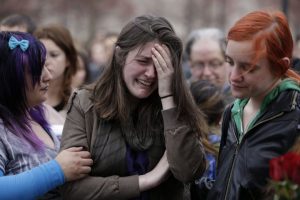 Christ died to free us from fear. I don’t take that to mean we won’t be afraid—of terrorists, spiders or monsters. But we can strive to trust him with our fears. The trust part comes from faith. Faith, like freedom, is not easy or comfortable. But in our increasingly crazy world, it’s the only promise of sanity.