I’ve known the month of September to be a wily foe. Perhaps her cunning is a mere protesting of the confusion that comes with bearing two seasons at once. Still, I haven’t liked her much. It was during her days that I lost my mom to breast cancer 26 years ago. Two years ago, my brother ended his life in September. Why, then, would I schedule a preventative double mastectomy for this dreaded month? To give September a chance to redeem herself.

In mounting cascades of prayers, love and assurance, September rushed me along with a rapid, knowing force. So bolstered, I cast no backward glances, and awoke ready on the day of surgery.

When my husband and I arrived at the hospital at 9 a.m., a friend greeted and prayed with us, staying through check-in. The three of us held hands, and my friend anointed me with healing oil. It gave peace an edge over my jitters. When a nurse ticked off my personal health history, the jitters melted to tears. Wanting to give my tears a voice, I explained: I signed up for this surgery because of my mom. Her too-soon death from breast cancer silenced her, but it wasn’t going to silence me. This day I was staring into the untamed maw of the disease and finally talking back — for me, for my husband and for my children. Inasmuch, it’d link the five of us forever. The words spilled, bathing the room in meaning and dropping me into deeper calm. 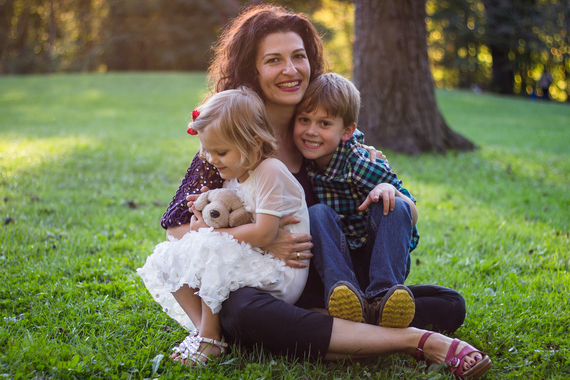 With my children, nine days before my surgery. Photo by Elisabeth Oda.

After a procedure to test my sentinel lymph node, I was ready for surgery. My plastic surgeon sailed in happily. With red and black markers, he drew sketches on my upper body — guides, he said, because I’d look different once in the operating room. I call them the markings of an artist: I woke up looking better than when I went to sleep.

Next up was my surgical oncologist. Spirited, brilliant, reassuring, with equal parts heart and sense, she cheered me on and answered last-minute questions. Bounding in last was a jovial anesthesiologist, explaining the drug cocktail I’d enjoy in surgery. “My job is to keep you safe. I’ll be with you the entire time you’re asleep.” He dipped a relaxant into my IV. In minutes I was mellowing on a blue-and-yellow sea of drowsy. The last thing I remember is coasting into the operating room, where the anesthesiologist asked me what I do for a living. I said I was a writer, and I was out.

It could’ve been five minutes or an eternity later — general anesthesia so clipped my grasp of time — and I was floating back from a celestial other-world. My first thoughts were, “Thank you, God, that it’s over and I’m awake. I’m so glad it’s DONE. Where’s my husband?” I don’t know if I managed to squeeze these thoughts into words for my recovery nurse. Talking felt like doing one-armed pull-ups while holding both of my kids.

The remains of that day are as foggy to me now as a dream.

My husband found me at some point, and we ended up in the room where I’d spend the night. Falling in and out of fitful bouts of sleep, I was aware of the IV gracing my right forearm; a monitor pinching my left index finger; an oxygen tube under my nose; a catheter that eliminated pesky bathroom trips; blood-clot-prevention sleeves hugging my lower legs; two drains sutured into my left and right sides; and a clicker that let me release pain medicine into my IV several times an hour.

As the torrent of anesthetizing drugs circled out of my system, a hard line of nausea stirred in its wake, not lifting until early morning. Ice chips, anti-nausea medicine dosed into my IV, peppermint oil and stints of sleep were my best friends.

By early morning my stomach settled, and my nurses removed all tubes except the drains and the IV. Both of my surgeons visited, and said the surgery went precisely as we’d planned. In the late afternoon I headed home, celebrating victories big and small.

I followed through on my decision. My range of motion was nearly complete, something I hadn’t expected, allowing me to dress myself. I was barely bruised. When I first looked in the mirror, I couldn’t believe it: My upper-body had curves. They were real, fuller, and my skin was the same. Nothing unnatural appeared in what I saw and felt. I did feel different and a little numb, but I had a good amount of sensation. The incisions were small and thin, sealed with surgical superglue instead of stitches. In time the scars would be minimal, maybe invisible.

What most startled me was a longing to tell my mom. I wanted to share with her my decision, my surgery story, my pain. I wanted her solace. I wanted to remind her that no matter how old I get, I will always need my mom — in the hard, the good, the defeats, the triumphs.

The life plots that change me most are tied up with a double-twine of joy and sorrow. I need both to keep me honest. This journey’s lacked neither.

A week later, my surgical oncologist examined me and her nurse removed my drains. Shedding the drains brought relief, but not as great as the findings of my final pathology report. My lymph nodes, margins and skin all tested clear. No cancer. In my lower left breast, though, were the earliest signs of more atypical ductal hyperplasia (ADH), the same type of errant cells my surgeon had removed last year. A smattering of the ADH cells were morphing into cells of low-grade ductal carcinoma in situ (DCIS) — stage zero, noninvasive cancer. It’s not deadly in its own right. Left untreated, DCIS sometimes leads to invasive cancer, which can be deadly.

These discoveries were so tiny and new, only mastectomy pathology would’ve found them — in other words, all of my breast tissue had to be removed and detailed for a week, in single-millimeter sections. “You’re the luckiest lady in the world,” my surgeon said. “This could’ve turned into invasive cancer before we were able to detect it.” Mastectomy is the full treatment for DCIS. That means no more mammograms, MRIs or biopsies for me, and I’ve no need for medicine or radiation.

Not that I was looking for it, but there it was: stark confirmation that I’d chosen the wisest path. That fire I’d felt back in June, nipping at my neck — it wasn’t an apparition. A storm was brewing in my body, and I’d escaped. Just in time.

The days since I learned the news have been fraught with awe and deep gratitude. The one who made me saved me from a monster I’ve feared since childhood.

He aligned the people, places and days in my life, creating a chorus of support I couldn’t deny. He changed the course of my life. I would’ve been the fourth generation of women in my family to develop breast cancer, were it not for his grace to stop the cycle.

I first learned about the wayward activity in my breasts last summer, not yet a year after my brother’s suicide. I was maxed out on tragedy. Prayers hadn’t helped my mom or my brother, and both had died in their 40s. Would I be next? Three in one family seemed too cruel. If God had heard my prayers, he was ignoring them. So I thought.

The mastectomy and its revelations don’t mean that I’ll live forever, or even past my 40s. I’m not suddenly immune to suffering. But this experience has given me a new appreciation for suffering and doubt. We need each other to make it in life, especially as we wade upstream.

God hears and he acts, not usually in the ways I want. He’s at least 50 percent mystery. When he does reveal his plans, they’re more interesting than mine. My brother and my mom are still gone. But I’m here. I can share my story and offer hope. Miracles are out there — inside of us, even. They have the power to restore and energize us for the way ahead, which is sure to be lined with the unexpected.

*This story originally appeared in the Huffington Post on Oct. 15, 2015.