Writing Character: Where to Begin?

Define story in one word.

Did you say “character?” Maybe “plot?”

Many people do, according to author Larry Brooks. It’s not quite right, though. The essence of story is conflict. With conflict, a force opposes your protagonist’s goal. It stirs dramatic tension and readers’ emotional investment. Without conflict, you have something more like a diary, says Brooks in the first of five chapters devoted to character in his book, Story Engineering.

Character is one of four essential story elements. It must be blended with concept, theme, and structure:

Character is the catalyst that empowers everything else in your story. Characters experience theme. Characters act out along a linear structure. Characters live out the plot and the antagonistic forces that make plot possible.

Knowing what character is places fiction writers on solid ground. But we need more than a definition. More than the guidance magazine articles and conferences often provide. As Brooks says, guidelines about writing character tend to be glittering generalities that leave us with little understanding of how to begin. Where, then, do we go?

This is the place to start. Seven realms where you can live and work, illuminating your characters, Brooks says:

Character is Part of a Story, not the Whole

Repeating what Brooks said earlier: Many writing experts point to the core of storytelling as character. That’s not inaccurate. Nor is it the full truth. He circles back to this because it’s critical for authors to grasp before they begin writing.

Stories have several moving parts. Character is one. Likewise, rich characters have moving parts. Brooks breaks down each of the parts. He defines and categorizes them so we can approach each methodically and effectively. 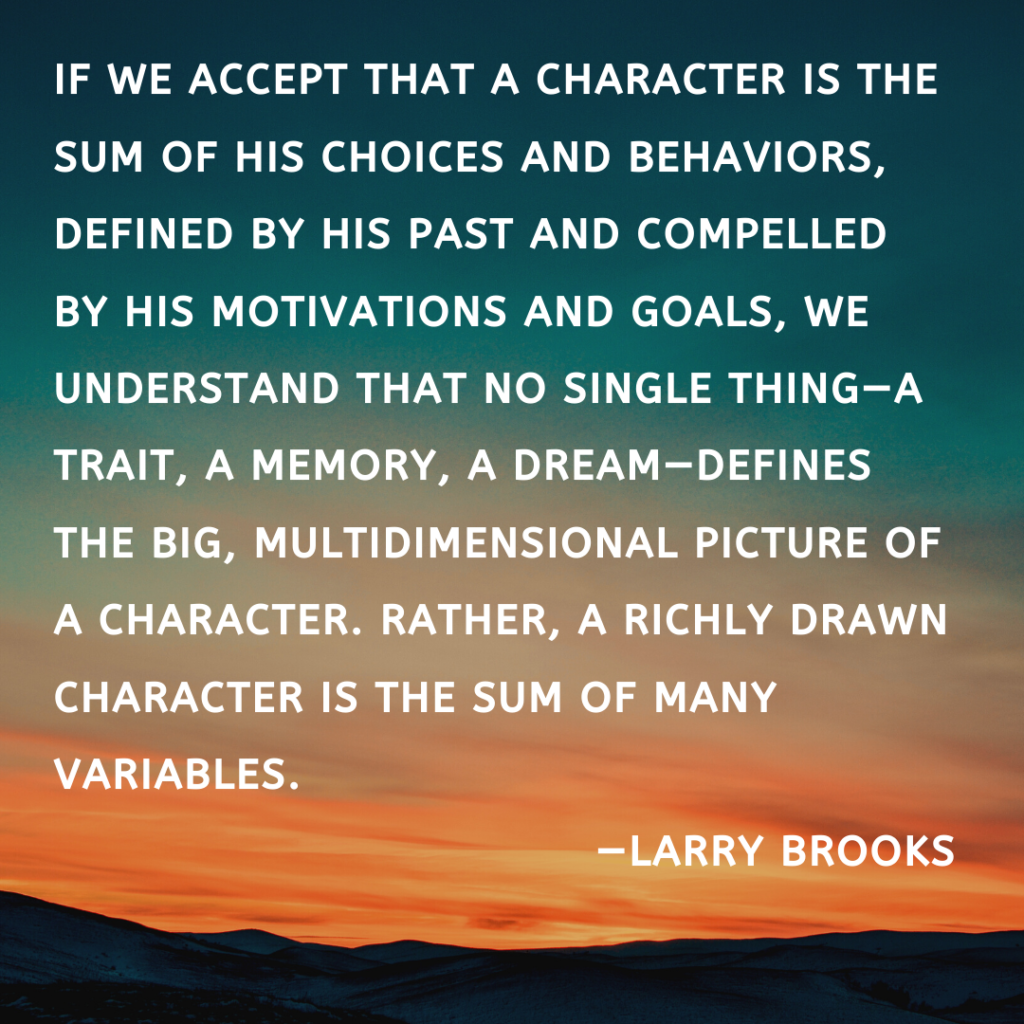 He offers the analogy of a character-development machine. Remember the seven variables we talked about above? Think of each one as a separate dial, with settings from one to ten. These seven dials give us at least ten million unique settings for each character we create.

All we have to do is adjust the dial settings to the context and nature of our story. The rest is art. And fun.

No two people who populate our life’s landscape are alike. Our fictional characters shouldn’t be, either. That’s good art, imitating life, in all of its imperfect glory.